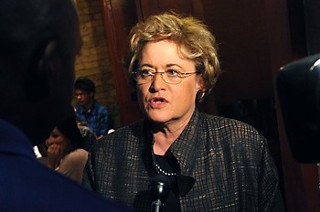 Travis County Commissioners this afternoon voted 4-1 to have the county's budget office come up with roughly $1.8 million to help to fund the Travis County District Attorney's Public Integrity Unit, which this summer was stripped of state funding for the coming year by Gov. Rick Perry.

The county funds would be added to more than $734,000 in funds D.A. Rosemary Lehmberg said her office would pull from its Forfeited Property Account to pay for the prosecution of white collar fraud and public corruption cases handled by a PIU that will operate with fewer employees in fiscal year 2014.

In the wake of Lehmberg's April drunk driving arrest and conviction, for which she was sentenced to 45 days in jail (she served 20), Perry vowed to veto $3.7 million per year in biennial funding for the PIU, which has statewide jurisdiction in certain kinds of fraud and corruption cases, unless Lehmberg resigned her post. She declined and he went through with his threat, slashing a source of funding that had been allotted to the PIU since 1982. Prior to that, the D.A.'s PIU operations were funded solely by the county.

Only Pct. 3 Commissioner Gerald Daugherty voted against the measure, which he said would force taxpayers to come up with money that the county wouldn't have lost if Lehmberg had simply retired – as Perry asked. "This is not healthy for the taxpayer," he said. "There was probably a way out of this, but it was not chosen."

Funding for FY 14 had been earmarked at $3.7 million in state funding to cover the work done by 35.5 full-time employees; now, with Commissioners' approval, $2.5 million in county and PFA funds will combine to cover the work done by 27.5 FTEs. Indeed, Lehmberg's office has also already talked to the Texas Comptroller's office and the Texas Department of Insurance to say that it will not be able to accept for prosecution fraud cases that take place outside Travis County, as it had previously done. On a positive note, however, Lehmberg said that state funds for the PIU come with restrictions on the kinds of cases attorneys in that unit can work on. By finding a way to fund those employees through her office's general budget she would ultimately have more flexibility in where they can work, allowing for attorneys to be assigned to other projects when needed, she told Commissioners.

The Travis County DA's office has special statutory jurisdiction in insurance and motor fuel tax fraud cases. Because the seat of state government is here, the PIU also prosecutes other tax and financial crimes that may have elements that happen elsewhere because certain key aspects of the crime, like the filing of legal forms – think campaign finance, for example – happen in Austin, which is squarely within the D.A.'s regular jurisdiction, even if the fraudulent documents were filed by a candidate or officeholder from some other county. That said, Lehmberg told Commissioners, the kind of high-profile political corruption cases that the PIU is typically associated with – read, the prosecution of Tom DeLay – make up but a small percentage of what the PIU does.

As of the end of June, the PIU had 425 cases pending, 293 of which are Travis County cases; 132 of those cases are brought from other jurisdictions. Still, the office can't simply dump those 132 cases in order to save money, Lehmberg said, because a majority of those cases are already indicted or face other issues – like bumping up against a statute of limitation – that would make it difficult, if not impossible, to be prosecuted in another county. Of those cases she said there are 54 that could be returned to another county or state agency for prosecution. The others, she said, "we can't send back effectively without destroying their prosecution." Lehmberg said her office has good working relationships with TDI and the Comptroller, but has been told by officials at each office that right now they can't afford to help pay for the prosecution of any of the cases they've asked Lehmberg's office to prosecute. When asked why that is the case, Lehmberg said she thought in part it was budget insecurity, with the last fiscal year coming to a close and the next not yet started, and "plus, there's some political pressure" at work, she said.

Indeed, although no one from the public came to speak against the proposal – or to again speculate on whether Lehmberg would, should or could resign her post – Daugherty said he felt that the "majority" of taxpayers in the county would agree that another avenue for fixing the budget problem – that is, via Lehmberg's resignation – should have occurred. "It's not this court's fault to what has happened," he said. But now officials are having to ask taxpayers to foot the bill "in order to not do the thing that...needed to be done."

That prompted County Judge Sam Biscoe to ask Daugherty exactly what else should be done: The cases are pending and can't be sent back. Should the county just dump them? "What do we do with them?" he asked. "Just hope they go away?" When Daugherty continued to talk around his assertion that Lehmberg should have resigned in order to save the funds, but without actually saying that directly ("sometimes we have to deal with the reality of ways to do things and if these [things] aren't chosen," he awkwardly continued), Biscoe again jumped in: "What other way are you talking about?" he asked. When Daugherty finally said what he meant – "I really don't want this to be an indictment of Rosemary," he lamented – Biscoe argued that the court couldn't do anything about that. Indeed, back in May, at Daugherty's request, the county attorney's office advised that it was not in the court's purview to force an elected official to resign her post. (Lehmberg is still facing both criminal and civil actions that could force her ouster.) "That's not our authority," Biscoe reminded Daugherty. "What we have to do [now], each of us, is to do what we believe is right," and to vote accordingly.