Fight over abortion regs will move to courts 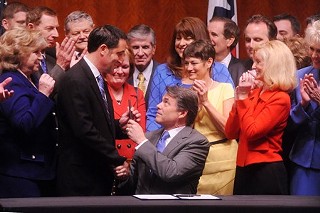 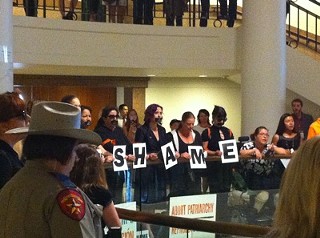 The Capitol Auditorium was a veritable who's who of anti-choice politics this morning as lawmakers and advocates from across the state gathered to see Gov. Rick Perry sign into law House Bill 2, the sweeping abortion regulations bill passed last week after months of debate and protest.

The bill, carried by Rep. Jodie Laubenberg, R-Parker, and Sen. Glenn Hegar, R-Katy, bans abortion after 20 weeks, requires licensed abortion clinics to transform into costly-to-build ambulatory surgical centers, mandates that abortion-preforming doctors have hospital admitting privileges within 30 miles of each facility where abortions are performed, and requires that pharmaceutical abortion be administered pursuant to a specific protocol created more than a decade ago.

Before the bill was called up for final debate in the Senate last Friday, Hegar said he was fortified by emails expressing support for the measure that had come to him from religious leaders. The experience taught him to "believe in the power of prayer," he told the friendly crowd seated before the auditorium stage as the chanting of protesters – outside the room, clad in black, and shouting "Shame! Shame! Shame!" – seeped through the cracks in the doors that enclosed the ceremonial gathering. "The power of prayer that day [that HB 2 passed] was immense."

Indeed, the power of majority was likely more immense; with sizable majorities in both the Texas House and Senate it was, in essence, a foregone conclusion that HB 2 would, eventually, pass and Hegar would be here, in the Auditorium, standing next to Perry and thanking his supporters. Without the rules in place that blocked the measures from being considered in the Senate during the regular session, the controversial measure was pushed through quickly during the ongoing second-called special session, for which Perry put abortion regulations at the top of the call. In addressing the assembled crowd this morning, Perry was solemn. "In signing [HB2] today, we celebrate and further cement the foundation on which the culture of life in Texas is built," he said. "It is our responsibility and duty to give voice to the unborn, the individuals whose very survival is at stake," and to "improve the quality of care women receive, ensuring that any procedure they undergo is performed in clean, sanitary and safe conditions, by capable personnel."

Whether that is what the new laws will actually do remains a topic of debate – and a question that the court system will soon be asked to decide.

Bill supporters insist that the regulations fall within the framework of legal abortion as defined by the U.S. Supreme Court; bill opponents believe the new regulations – on top of the already stringent abortion regulation framework in Texas – present an illegal, "undue burden" that will effectively block access to legal and safe abortion care.

With the majority of the regulations set to take effect this fall – on the 91st day after the second special session ends (only the ASC regulation is delayed, until September 2014) – the fight over the new law is likely just weeks from an inevitable court battle, where advocates will likely seek an injunction blocking the law before it can ever been implemented.