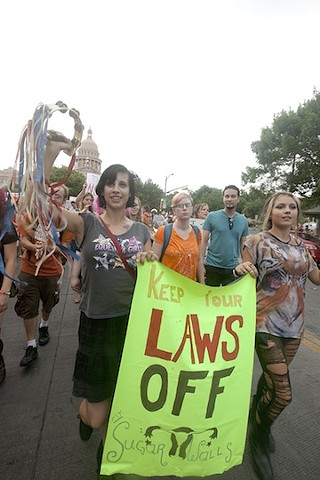 As folks filed into the Capitol today in anticipation of the Senate debate over the controversial abortion regulations measure, House Bill 2, security was tight, with extra Dept. of Public Safety troopers on hand. That seems logical. But then word came that they were hand-searching bags and confiscating tampons. What?

That's right: DPS was confiscating tampons, feminine pads and, in the interest of fairness, I guess, condoms.

Word that women were having their feminine products confiscated before they could enter the Senate gallery to watch the debate hit the Twitterverse like lead shot and black powder. Bang!

Shortly after the online explosion, the confiscations were called off – thanks, we're told, to the intervention of Austin Dem Sen. Kirk Watson who reportedly said that the idea that tampons should confiscated was "boneheaded" and "crazy."

We asked DPS whose decision it was, and why that decision was made. We didn't get a direct response, but instead received the statement below in a DPS email blast to media:

AUSTIN – The Texas Department of Public Safety (DPS) today received information that individuals planned to use a variety of items or props to disrupt legislative proceedings at the Texas Capitol.

In the interest of the safety and security of Texas legislators and the general public, these inspections will continue until the conclusion of Senate business.