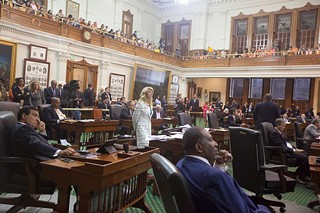 In an impassioned speech before the vote, Austin Dem Sen. Kirk Watson lamented the fact that the Senate has "discarded" its "traditions and practices" in an effort to ram through regulations that are "as extreme as any in the nation," and that could be considered the "poster child for heavy-handed government regulation."

If Lt. Gov. David Dewhurst hadn't abandoned Senate tradition – eliminating the so-called "blocker bill" that prevented the GOP majority from getting these regulations through in the regular session – the majority would have had to work with the Dems to come up with a compromise measure, one that would likely embrace many of the proposals raised tonight as amendments, and summarily rejected – from an exemption to the 20-week ban for victims or rape and incest to a proposal to provide birth control without parental consent to teen mothers.

As the evening grew inevitably closer to the vote, several protesters donned fake blood on their clothes and tried to chain themselves to the Senate gallery rail; only one protester, Jaime Leigh, succeeded, requiring Dept. of Public Safety officers to use bolt cutters to cut her free. Others yelled out "Shame on you!" and were pulled from the gallery.

Watson pleaded for calm. Then later, in his speech, he asked that his colleagues not pass the measure. There is still "room and still time for us to all come together," he said.

In support of the measure, Sen. Jane Nelson, R-Flower Mound, chair of the Senate Health and Human Services Committee that heard hours of testimony on the bill, said that as a mother, she considers herself "an expert in the unborn child." In "my expert opinion," she said, "an unborn, five-month child does feel pain." And that child, she said, "has the right to live," necessitating the 20-week ban.

Similarly, she said the regulations that impact doctors and clinics are there to make sure women seeking abortion do so in a "safe" environment. "That's our job!" she said of the Legislature's work.

She did note that our "cuts were too deep" to the family planning budget in 2011, and said lawmakers have moved to rectify that problem. Indeed, she told Dewhurst that she would like an interim study ordered on women's health issues. "Done," he said.

Watson was unimpressed. The "indignant claims" from his GOP colleagues and the "insistent spin" that these measures are about women's health and safety "are bogus...and hypocritical," he said. He said he's heard colleagues wonder allowed about why it is that some people say they've declared a "War on Women" in pushing these regulations. Because, he said, when these issues come up the only answer the GOP has is to "take away women's rights" and to try to drive the clock back in time, to when "abortion was not safe and not legal."

In closing out the opposition speeches, Sen. Wendy Davis said that she believes in the beauty of life, and also the beauty of women who "deserve to live, deserve to determine the direction of their lives, deserve to be recognized as full people, capable of making decisions," she said. "The fight for the future of Texas is just beginning."

At 11:49 pm the Senate adjourned – only to reconvene at 11:50 pm, in order to start a new Legislative day and to pass HB 2 on a third, and final vote before moving the measure on to ink-ready Gov. Rick Perry.

Indeed, after a heated exchange between Sen. John Whitmire, D-Houston, and the bill's sponsor, Sen. Glenn Hegar, R-Katy (he wrote an identical version, SB 1, to the bill be considered tonight), the senators voted down a measure that would have provided a exemption to the 20-week abortion ban for child victims of rape and incest.

The amendment was offered by Sen. Carlos Uresti, D-San Antonio. When Hegar declined to support the measure, Sen. Eddie Lucio, D-Brownsville, asked if he would be so inclined if the language specifically exempted children 17 and under. Hegar paused, but ultimately declined. "I do not think that substantially changes my thoughts on the amendment," he replied.

At that point Sen. Jane Nelson, R-Flower Mound, rose with a question: What would happen, she asked, if the Senate did accept that amendment? It would have to go back to the House, she was told. And that, Nelson said, would cause "significant delays" to getting the bill passed. Yes, it would, Hegar agreed.

With that Whitmire was incensed, and lit into Hegar for rejecting a "morally courageous" amendment in exchange for political expediency. "The only comeback that you have is that it would jeopardize [passage]?" Whitmire asked, incredulous. "We have two more weeks [in the special session]! How in the world...[can you say], 'Good concept, we can consider it in the future, but we can't jeopardize it tonight.'"

Hegar denied the charge, saying all he did was answer the questions put to him. He is trying to "debate the merits" of the measure, not "timelines."

The Senate voted to reject the amendment on a 18-12 vote.

The GOP majority has also voted against amendments that would allow for the vaginal delivery of the second dose of abortion drug RU-486, to remove medically-inaccurate language from the Women's Right to Know pamphlet (given to all women seeking abortion), and to require state-funded crisis pregnancy centers to provide comprehensive health care counseling.

EARLIER:: After more than three hours of questions – and some grandstanding – the Texas Senate is finally considering amendments to House Bill 2, the sweeping and controversial abortion regulations bill.

Since the body convened, just before 3 pm, senators have peppered Sen. Glenn Hegar, R-Katy, with questions about the bill, which, as written, would ban all abortion after 20 weeks, require abortion clinics to upgrade to ambulatory surgical centers, constrain how doctors can administer medical abortion drugs, and require that abortion-performing doctors have hospital admitting privileges within 30 miles of each clinic where they perform the procedures.

Hegar told his colleagues that the bill is necessary to prevent unborn babies from feeling the pain of abortion and to increase protections for women seeking abortion.

Kicking off the discussion was Sen. John Whitmire, D-Houston, who asked Hegar (who is carrying the bill authored by Rep. Jodie Laubenberg, R-Parker) why, if this measure is so important, did he only file the legislation this year? Hegar didn't have a direct response, really, except to say that he could turn it around and ask Whitmire why he didn't propose to reform juvenile justice years before he did.

"What concerns me," said Whitmire, "is the rush" to push the legislation through. Does Hegar believe this bill, as written, is "perfect?" Whitmire asked. No legislation is perfect, Hegar replied. Then why hasn't Hegar agreed to accept any amendments, Whitmire inquired – including an amendment to add an exemption to the 20-week ban for victims of rape and incest, which was offered yesterday by Sen. Carlos Uresti, D-San Antonio, in the Senate Health and Human Services Committee, before the bill was voted out, on a party-line vote, to the full Senate. Hegar replied that he never said he wouldn't accept any amendments "whatsoever."

That may be true, but he's come about as close to saying that as possible – and, indeed, the House majority, which passed HB 2 on a 96-49 vote Tuesday night, has made it clear no amendments are wanted. The GOP marching orders were to keep the bill "clean," Rep. Sarah Davis, R-West University Place, noted on the House floor before her proposed amendment to the bill was shot down.

Nonetheless, lawmakers who support the measure have used the floor time to bolster their bona fides: Sen. Robert Deuell, R-Greenville, offered a long and interesting story about 1830s hospital infections and the practice of hand-washing to illustrate the point (or so it seemed) that medical experts often disagree – as with whether a baby feels pain at 20 weeks – but it was important to err on the side of caution. Deuell and his wife experienced an unplanned pregnancy just after they were married. And that unplanned pregnancy is "now a 42-year-old rocket scientist," he said. Sen. Dan Patrick, R-Houston, took the hushed tone approach – importing gravity to his monologue about the necessity of requiring a woman to make four doctor visits in order to obtain a medical abortion, that is, one induced by RU-486. The point, he said is that the "killer drug" destroys the fetus cells and so the repeated visits are made not to protect the fetus, but to protect the mother, to ensure those cells are "flushed" out of her body. "As a Texan, who cares about my fellow man," he began, before adding, "and woman," Patrick said he "values her life as much as the life in her womb."

The body has begun to consider amendments. The first, to allow for abortion doctors to have a transfer agreement with a hospital or admitting privileges at a hospital, offered by Sen. Royce West, D-Dallas, was just tabled (that is, rejected) on a 19-11 vote; expect to see more of that as the night rolls on.