What to Expect When You're Expecting a Special Session 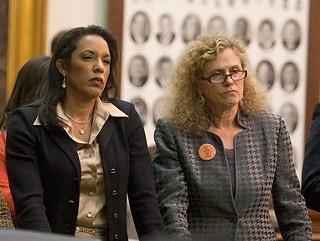 At 2pm today, Monday, July 1, the Texas House and Senate are scheduled to gavel in for the second special session of the 83rd Legislature. After the kumbaya nature of the regular session, and the utter debacle of the first special, what should everyone expect from this next 30 day crawl?

A quick recap: After a cavalcade of incompetent decisions by the Republican leadership in the first special session, which ended on June 25 in a massive outburst of public support for Sen. Wendy Davis, D-Fort Worth, and her attempt to filibuster a highly restrictive piece of anti-choice legislation. In the process, the Senate took two more bills down with it: More cash for transportation, and new sentencing for 17 year olds charged with a capital crime.

And now we're all back, for a maximum of 30 days or until the two chambers do what they want to get done, or until Gov. Rick Perry adds more to the call. Members of both parties have already prefiled a cavalcade of bills that, unless the governor extends their remit, will never be heard. The biggest push is to resurrect construction bonds for universities: Sen. Kel Seliger, R-Amarillo, is trying to get the desperately-needed tuition revenue bonds back up for debate, while individual lawmakers have filed bills with building cash for UT Austin and Texas A&M San Antonio. Meanwhile, both Sen. Kirk Watson D-Austin, and Sen. Kevin Eltife, R-Tyler, have filed bills to create a County Park Beautification and Improvement Program.

First, the Senate. Normally the more icily polite of the two bodies, the upper chamber has been left bitterly divided after Lt. Gov. David Dewhurst decided to throw the rules out (and leave Sen. Robert Duncan, R-Lubbock, to pick up the messy pieces.) He told right wing talking head Ed Morrissey last week that he expects to pass the new abortion restrictions in two weeks, but it could be an awkward time for him. As Sen. Judith Zaffirini, D-Laredo, Tweeted, "Hoping Texas senators will start anew and live up to our stature as 'the greatest collaborative body in the world.'"

Dewhurst's leadership is in tatters. However, due to the fact that he and many other senators have staked their political leadership on restricting access to reproductive health care, and with the addition of anti-choice Democrat Sen. Eddie Lucio Jr., D-Brownsville, odds are that the Senate will start processing bills today. That may not be true in the House.

As reported this morning, there is mounting speculation that the House may not be quorate when Speaker Joe Straus gavels in at 2pm. But this time the Republicans won't be able to blame the 52 House Democrats. There's increasing buzz that, between pro-choice Dems, Republicans wanting to make a quiet statement against their own leadership, and the number of lawmakers who are just sick and tired of being in Austin, the lower chamber may be light in numbers. From a local viewpoint, there's no word whether Rep. Mark Strama, D-Austin, will bother coming back at all, since he has accepted a job with Google Fiber and was last seen heading off on vacation.

Oh, and important fact to remember: The issues may be the same, but the bills change. It's a new session, so the old bill numbers have become moot as the chambers file new language.

• SB5 (abortion restrictions that would reduce the number of abortion providers in Texas from 42 to five) becomes SB1 in the Senate and House Bill 2 in the lower chamber (also watch for SB9 by Sen. Dan Patrick, R-Houston, which would mimic the abortion-provider facility restrictions in SB1 when it comes to prescribing abortion drugs.)

• SB23, introducing new sentencing guidelines for 17 years olds charged with capital crimes, is back as SB2 in the Senate and HB4 in the House. Look for potential sparks here: Author Sen. Joan Huffman, R-Houston, originally wrote a bill that mandated life with parole: The House wanted life without parole. That could be a big bridge to cross. Moreover, two Democratic reps – El Paso's Joe Moody and Edinburg's Joe Canales – have filed rival bills that would keep the parole option open.

• Senate Joint Resolution 2 (which would reallocate some cash currently intended for the Rainy Day Fund into the State Highway fund, to fix the state's crumbling roads) re-emerges as SJR1.