Thousands Rally at the Capitol 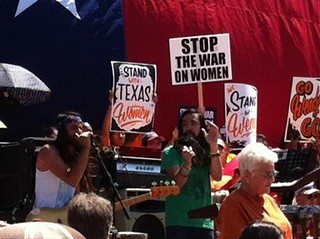 Bright Light Social Hour at today's rally at the Capitol

More than 5,000 supporters of reproductive rights gathered in front of the Capitol today for a rousing rally in advance of the 2pm start of the second special-called session where another divisive fight over abortion rights is expected to take center stage.

The Capitol's south lawn this morning was a sea of orange-clad supporters of reproductive rights who began gathering hours before the rally's official noon start time. Indeed, abortion rights supporters far outnumbered anti-choice demonstrators who came to the Capitol wearing blue, clutching crosses, and praying softly outside the building and inside its rotunda. (By mid-afternoon the blue-shirted supporters of restricted abortion rights had all but ceded the rotunda to supporters of reproductive rights whose chants echoed through the Capitol halls and seemed unlikely to end any time soon.)

After brief performances by Austin's Bright Light Social Hour – the band played their new instrumental work, "Wendy" – and former Dixie Chick Natalie Maines, Houston Dem Rep. Jessica Farrar kicked off the rally by introducing her Democratic colleagues, who each offered a quick-hit soundbite to get the party rolling. There was this from Fort Worth Rep. Lon Burnam: "We don't want to live in Taliban, Texas!" Or this one from Houston's Armando Walle: "A hanger is not health care."

The crowd was loud and energized – Capitol staffers and police were drawn to the windows where they could be seen peering between shutters, or leaning out and taking pictures of those assembled below – as a series of religious leaders and other speakers took the makeshift South Steps stage. Actress Lisa Edelstein, a.k.a. Dr. Lisa Cuddy from TV's House, told an appreciative crowd that she only played a doctor on TV, had never diagnosed or treated anyone and, indeed, had no medical training whatsoever. Thus, she said, "I'm about as qualified to make a decision about women's health as Rick Perry and the Texas Legislature."

The rally comes on the heels of last week's filibuster in the Texas Senate by Sen. Wendy Davis, D-Fort Worth, of the divisive abortion regulations bill that would have the effect of outlawing abortion after 20 weeks and would likely shut down 37 of the state's licensed abortion facilities. Last week known as Senate Bill 5, the measure has been dusted off and refiled in the House by Rep. Jodie Laubenberg, R-Parker, and dubbed House Bill 2. Democratic lawmakers have vowed to fight to keep the bill from passing, though with the session starting anew it will be difficult, at best, to keep the measure from clearing both chambers and making it to pen-in-hand Perry.

Today's rally was a call-to-action, a means to keep the largely Democratic opposition energized and eager to continue the fight. Indeed, one by one, today's speakers did just that – Texans Cecile Richards, president of Planned Parenthood, and Ilyse Hogue, president of NARAL, gave crowd-rousing speeches, as did Allison Catalano, the Republican former staffer for GOP Rep. Myra Crownover who quit her job last year over Crownover's support for devastating cuts to the family planning budget.

Sen. Kirk Watson, D-Austin, introduced his chamber's Democratic caucus and called out the Republicans in the Senate – Lt. Gov. David Dewhurst chief among them – for making up the rules as they went during Davis' filibuster last week. Republicans who tried to shut Davis down were the real "unruly mob," he said, who maneuvered as best they could "so that the folks in control could do whatever they had to do to get their way." A "way" that isn't particularly well thought through: The regulations under consideration "won't do a lot to prevent abortions, but will do a lot to prevent legal ones," he said.

The belles of the Tuesday afternoon ball, however – the real rock stars of the nearly two-hour-long rally – were Sens. Leticia Van de Putte, D-San Antonio and Davis, each of whom prompted the crowd to deliver its most deafening roars. Van de Putte's efforts to be recognized on the Senate floor just before midnight last Tuesday, in an attempt to offer a motion to adjourn, were ignored by Sen. Robert Duncan, R-Lubbock (who was put in the unfortunate position of having to preside over the chamber when Dewhurst abruptly exited stage right) and vaulted her into the national spotlight when she asked him exactly what it would take for a woman's voice to be heard. On Tuesday, she reminded the crowd that now is the time to speak up: "I did everything possible [to be heard on Tuesday night], but my voice was ignored," she told the crowd. "That's because it is certain that some people have trouble hearing women's voices. Today, and for the next 30 days, let's make sure they hear us."

Indeed, when Davis took the podium she told the crowd that the time to take back Texas begins now – the time has come to put out of business politicians who boost "their careers by bullying women who need health care," by turning down millions in federal funds to help poor Texans access health care, and who would strip tens of millions from the family planning budget in order only to try to cripple Planned Parenthood. "Every single statewide office is held hostage" by this sort of politician, she said, who "cares more about [his] own future than the future for Texans." Standing up for Texas women, she said, "should be a job requirement."

Public testimony on HB 2 will be considered in the House State Affairs Committee tomorrow, Tuesday, July 2, in the Capitol Extension starting at 3:30 pm. The hearing will end at midnight and the bill will thereafter be voted on and passed to the full House for consideration. The full House will be back in session on Tuesday, July 9; as will the Senate, which is considering its own new version of the anti-abortion bill.