All the SB5 news that's fit to blog 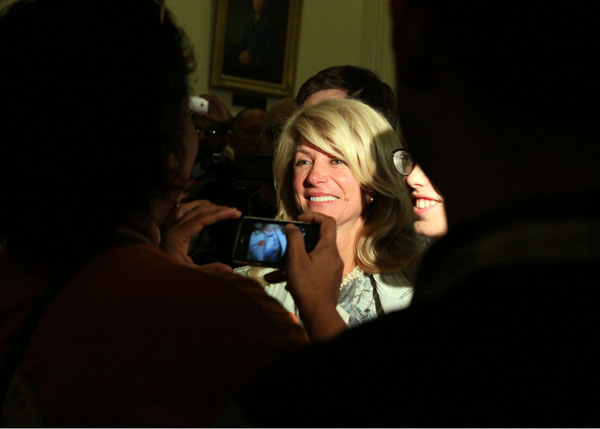 There are many words to describe the week in SB5: inspiring, unruly, historic. We'll add another – overwhelming. News was circulating at such a furious pace that it was easy to miss some of the bits and pieces. But don't worry, we're not going to leave you hanging.

• In the wake of Wendymania, some folks are getting a little bit testy. Empower Texans blamed both Republicans and Democrats for the chaos…but mostly Democrats, because Republicans are rubber and Dems are glue.

• Lt. Gov. David Dewhurst seemed mildly agitated after the fracas, but we're not quite sure what he wants us to come and take. Liberty? A few Werther's toffees from his pocket? Frankly, we're not sure his letter was an invitation at all.

• While Dewhurst was posturing, some politicians smelled blood in the water. Jerry Panderatterson said that the Dew done lost his horses.

• Freeze-dried jack-o'-lantern Sen. Dan Patrick joined in the fun, using the opportunity to throw his hat in the Lieutenant Governor ring.

• Patrick used his first day as a candidate to go after RU486. He probably thinks that it is a minor Star Wars character, but it's probably good to keep an eye on SB9 anyway.

• And Gov. Rick Perry decided to spend some time with people who really appreciate him. But since Anita decided to lock all the doors to the mansion, he was forced to travel to the National Right to Life Convention. He wasted no time in going after Citizen Wendy.

• Not everyone was ready to applaud. House Speaker Joe Straus said Good Hair's comments crossed the line. Thank goodness, we thought that was never going to happen.

• At least Sen. Ted Cruz learned Perry's lesson. He uses the NRLC platform to respectfully disagree with Sen. Davis. Like a president would. If that President had bloodlust. That would explain the widow's peak, however.

• Poor Rep. Patricia Harless may be the most irritated about the special session. She was finally planning to catch up on Modern Family on June 1st. Now she'll never know that Cam and Mitchell aren't just roommates.

• Perhaps jealous that Wendy's Flats were getting so much attention, Wendy's filibuster back brace got in on the Twitter action. We call dibs on Wendy's Hair.

• The mysteriously shifting Senate timestamp, although it does not have a Twitter parody account just yet, is raising eyebrows nonetheless.

• During the protests, Texas Troopers overreached in their efforts to maintain order. Or maybe they thought they finally nabbed that dastardly Joseph Kony.

• In the heat of the moment, a long-time activist also suffered a stroke.

• But according to the GOP, both were communists anyway.

• And if there's one thing Communists like, according to Sen. Kelly Hancock, it's a good old fashioned vomitorium.

• Still on Monday, the unruly mob has not one but two chances to make sure their voice gets heard.

• And as for Wendy Davis herself? Let's just say she's having a moment.

• Oh, and a quick note to some in the the national media: Sen. Davis is not best known for having dated former mayor Will Wynn. She did just a few things before that.