Says experience should tell her his way is the right way 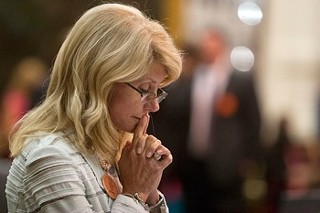 Speaking in Dallas this morning, Gov. Rick Perry not only dismissed the support of thousands who descended on the Capitol in support of the filibuster by Sen. Wendy Davis as the "unruly actions of a few," but also said that because of Davis' background she should, essentially, support the regulations and understand that "every life is precious."

In his speech Thursday morning at the National Right to Life conference in Dallas, Perry noted that there is no such thing as "an unwanted child, because no life is trivial in God's eyes" and that passing the omnibus abortion bill – familiarly, Senate Bill 5 from the now-concluded first special-called session – would advance the "culture of life" in Texas. "Who are we to say that children born into the worst circumstances can't grow to live successful lives?" he asked. "In fact, even the woman who filibustered the Senate the other day was born into difficult circumstances, the daughter of a single mother and a teenage mother herself. She managed to eventually graduate from Harvard Law School and serve in the Texas Senate," he said of Davis. "It's just unfortunate that she hasn't learned from her own example: that every life must be given a chance to realize its full potential; that every life is precious."

Perry's audacious and paternalistic remarks prompted a swift, and terse, response from Davis: "Rick Perry's statement is without dignity and tarnishes the high office he holds. They are small words that reflect a dark and negative point of view," she said in a statement. "Our governor should reflect our Texas values. Sadly, Gov. Perry fails that test."

There is no doubt that Davis's backstory is impressive: Working at 14 to help support her family, headed by a single mother; a single mother herself at 19 who started going to community college before transferring to Texas Christian University – and graduating first in her class – before heading to Harvard Law School, returning to Texas to practice law, and then serving nine years as a Fort Worth city councilwoman before being elected in 2008 to the Texas Senate. It's a story about which Perry appears to have missed the point: Personal experience has driven Davis to understand that decisions are made according to unique and individual circumstances; government, as she has repeatedly said – including more than once during the filibuster – should not substitute its wisdom for that of individual women, their families, and their doctors.

Unfortunately, that has not been the point of view of many conservatives under the Dome. Instead, over the last decade primarily white, Republican lawmakers have demonstrated repeatedly that fostering a "culture of life" means advocating for abstinence-only sexual education, ignoring the state's top-of-the-chart teen, and repeat teen birth rates, and slashing women's access to health care – and, importantly, to birth control – while also doing their best to make safe abortion care difficult to access, via waiting periods and a mandated trans-vaginal ultrasound.

Yet despite the decade of chipping away at abortion rights, one thing has remained relatively constant: the number of abortions performed in the state each year. From 2003 through 2011, the last year for which there are complete statistics, Texas doctors performed an average of 78,247 abortions each year; of those, an average of 494 were performed after 20 weeks – the point at which Perry would like to outlaw abortion altogether, regardless of the fact that many, if not most, of those later-term abortions are the result of major medical problems or gross fetal abnormalities.

Under the provisions of SB 5 – and, presumably, its as-yet-unfiled progeny – lawmakers allege that at 20 weeks a fetus can feel pain and that's why all abortion past that point should be outlawed – although scientifically controversial, it is a hypothetical pain that is apparently more concerning that what any individual woman in Texas might actually be facing.

Although Davis' Tuesday filibuster ably eliminated the GOP hope for passage of the measures during the first special, there is little doubt that they will, indeed, pass during this second-called session – as one legislative aide put it, sadly, not even Davis could filibuster for 30 days.