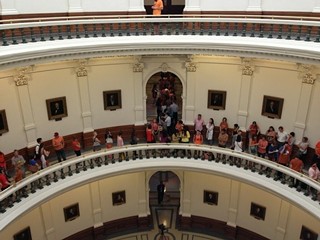 The line for the Senate gallery (Photo by Jana Birchum)

Update 2:55am: Shortly after 2:30 this morning, Planned Parenthood president Cecile Richards told supporters in the Capitol Rotunda that SB 5 is dead. More in the morning as official statements start rolling in; the next question is if Gov. Perry will call another special session.

It's 12:15, and the state Senate of Texas did or did not vote to pass Senate Bill 5. GOP Senators say yes; Dems say it was an illegal, post-midnight vote. Thousands of people at Capitol are loudly protesting, alternating shouts of "Wendy" (for Sen. Wendy Davis) with cries of "Shame!" Some senators are still in the chamber; it's not clear what will happen next. Whatever happens – and the Republican leadership appears determined to impose the new, likely unconstitutional regulations, if it happens tonight or in another special session – the story of the day is the inspirational heroism of Sen. Davis, and the enormous crowd of ordinary citizens who fought through the whole day to oppose the bill, and finally burst into full-throated protest when it became clear that the Senate leadership would impose a vote in spite of the body's own rules and traditions.

When Sen. Leticia Van de Putte, with the clock ticking down toward midnight, asked the chair, "When can a female senator raise her hand and be recognized by her male colleagues" – she had attempted a motion to adjourn that was ignored – the gallery and rotunda broke into overwhelming cheers, drowning out all business and pushing the Senate until midnight. No one could hear, nor be sure there had been a vote. Senators remain in the chamber, but it's not clear that anything will be resolved tonight.

It is clear, however, that this battle has just begun, and it reaches far beyond the specific issues of SB5, as crucial as they are. Texans have seen the lengths the state GOP leadership will go to to impose their laws applauded only by hard-right Republican primary voters. Texans have long memories.

#StandWithWendy became the hash-tag of the day, the entire country was riveted by the proceedings, more than 100,000 people nationwide were watching by the end of the day. We have not heard the end of this story. 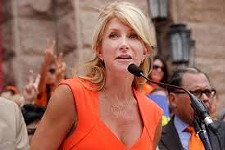 News Ticker: August 1
All the news that's fit to blog