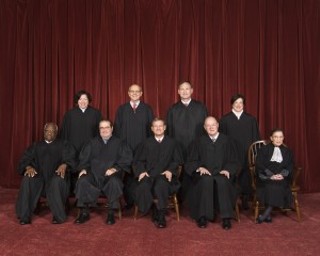 In a landmark ruling for LGBT rights, this morning the Supreme Court struck down the Defense of Marriage Act as unconstitutional. The court also dismissed the Proposition 8 case on standing, clearing the way for same-sex marriages to resume in California. The court stopped short, however, of ruling that all people have a fundamental right to marriage.

Writing the 5-4 majority opinion on United States v. Windsor, Justice Anthony Kennedy said that DOMA violated the constitutional guarantee of equal protection. "The federal statute is invalid, for no legitimate purpose overcomes the purpose and effect to disparage and to injure those whom the State, by its marriage laws, sought to protect in personhood and dignity. By seeking to displace this protection and treating those persons as living in marriages less respected than others, the federal statute is in violation of the Fifth Amendment.”

Kennedy was joined in the majority by Justices Ruth Bader Ginsburg, Stephen Breyer, Sonia Sotomayor and Elena Kagan, with Chief Justice John Roberts and Justices Antonin Scalia and Samuel Alito filing dissent. The decision allows same-sex couples who are legally married in their home state access to the more than 1,000 rights and benefits accorded to opposite-sex couples by federal law. The decision also allows the defendant Edith Windsor to collect a $360,000 refund for estate taxes paid after the death of her spouse Thea Spyer.

Hollingsworth v. Perry, the case concerning the constitutionality of California's Proposition 8 same-sex marriage ban, was dispensed with on standing. In a 5-4 decision, the court said that the proponents of the ban did not have constitutional authority to argue the case before the Supreme Court. The case was sent back to the lower court with instruction to dismiss.

“We have never before upheld the standing of a private party to defend the constitutionality of a state statute when state officials have chosen not to," Chief Justice Roberts wrote in the majority opinion, joined by Ginsburg, Scalia, Breyer and Kagan. Justice Kennedy delivered the dissent backed by a surprising coalition of Thomas, Alito and Sotomayor. Although the dismissal will likely mean that same-sex marriages will resume in California, it has limited implications nationally. States currently banning same-sex marriage will not be affected by the ruling.

Nonetheless, LGBT rights advocates are celebrating both decisions as civil rights milestones. In a statement regarding the DOMA decision, President Barack Obama wrote, "The Supreme Court has righted that wrong, and our country is better off for it. We are a people who declared that we are all created equal – and the love we commit to one another must be equal as well."