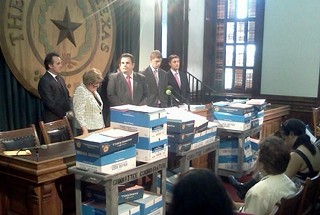 As the filibuster of Senate Bill 5 continues in the Senate, state reps have little to do except wonder whether they'll be back for another. So a cadre of conservatives nipped out to an office supply store, bought a bunch of paper, and staged a press conference.

The idea was to present 84,610 sheets of pink and blue paper to the office of Sen. Wendy Davis, D-Fort Worth, as she continued her filibuster to derail the backdoor abortion ban in Senate Bill 5. As Davis took questions on the Senate side, a contingent of the press posse trooped over to the Speaker's press room to be lectured by former speaker candidate Rep. Bryan Hughes, R-Mineola, on how each sheet represented an abortion in Texas in 2011. There was a flanking party of his fellow lawmakers from Tarrant County: Rep. Bill Zedler, R-Arlington, was on hand, as was Rep. John Stickland, who recently Tweeted at the height of the debate, "Some days u r extra thankful we still have the right 2 protect ourselves & the 2nd amendment - Today is 1 of those days."

Rep. Chris Turner, D-Arlington, called the stacks of paper "a cheap political stunt." Describing SB5 as "big government at its worst," he said, "If these Republican members who profess to be for limited government really believed in what they say, they wouldn't be for this bill."

However, they are, and several bristled at Turner's claim that this was a cheap political stunt. Zedler seemed particularly chagrined that Rep. Jodi Laubenberg, R-Rockwall, was being condemned on the national stage for her outrageous claim that rape kits scoop out all the semen, preventing a woman from getting pregnant. Lots of Democrats had been wrong on stuff, he said, but "nobody talks about that. They all want to talk about Jodie's misstatement." Wait, didn't Laubenberg author several abortion bills? Shouldn't she know better? Zedler replied, "She doesn't have to be an expert on the issue. She just has to be an expert on the bill."

Sticking to his guns, Zedler said that "the more knowledge that comes up about the development of the unborn life, the more pro-life the country's become." But there's some suggestion that, nationally, Texas' proclivities for turning a special session on a controversial issue like abortion into headline news might be damaging in 2014.

The presser ended, and the GOP cadre started rolling the reams across the capitol and down to Davis' office. The press corps dispersed, grateful at least for a chance to stretch their legs. With eight hours still left on the filibuster clock, they'll need it.