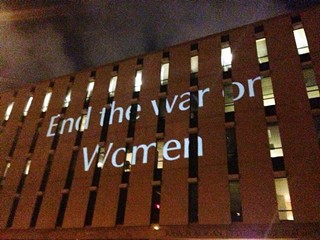 It’s 12:25 in the morning in the House State Affairs committee room at the John H. Reagan building in the Capitol complex when all hell breaks loose.

There are maybe 100 people in the chamber, with several hundred others in two designated rooms at the other end of the building, watching the public testimony for House Bill 60 on two projection monitors, waiting for their names to be called.

They’ve driven in from all over the state – from Houston, from Dallas, from San Antonio, the Valley. There’s an older gentleman there from El Paso. They’ve come to Austin for a “citizen’s filibuster,” each demanding their three minutes of time to testify about the devastating effects that HB 60 would have on abortion access in Texas. Seven hundred people have signed up to speak, though many of them don’t appear in the chamber when their name is called. The goal, as much as it is to be heard, is to run out the clock on the special session, which ends at midnight on Tuesday. If 700 people each take three minutes to speak, it’ll be awfully hard to get to that floor vote. But then things take an angry turn, because Rep. Byron Cook – the committee chair – suddenly declares that the testimony will be ending regardless of how many people are still waiting to speak. Because he’s bored.

“The testimony has been impassioned, but it has become repetitive, so I am going to only allow another hour of testimony on this bill,” Cook declares. People in the “overflow” rooms pack up their laptops and phone chargers and rush to the chamber, which has become a shouting match. For much of the night, the committee room had been a venue of reasonable decorum, at least by the terms of a heated debate on a bill that would close 37 of the 42 clinics that perform abortions in the state of Texas, criminalize the procedure if a woman is 20 weeks or more into her pregnancy, and require thousand-mile round-trip travel for women in some parts of the state if they wanted to take the RU486 abortion pill. By the standards of that debate, the fact that the cheers and applause have been replaced with American Sign Language hand waving is a mark of great restraint.

That’s how it had been in the chamber, anyway. In other parts of the building, the atmosphere was different. In the larger of the two overflow rooms, the whole evening had felt kind of like a high school lock-in. The people who offered testimony were almost exclusively opponents of the bill – though there were maybe a dozen supporters who unwittingly lent their voices to the filibuster effort as well, in order to speak out about how if a worm bitten by fire ants could feel pain, there’s just no way a fetus can’t; or to complain about a culture coarsened by repeated viewings of CSI and Criminal Minds; or to explain that, because they didn’t regret the decision to carry their non-viable fetus to term, no one in the state should legally be allowed to make a different choice. In the overflow room, when those people would speak on the projection screen, people would heckle them. Austin Eater.com editor Andrea Grimes and her husband, Texas Observer reporter Patrick Michels, brought a big box of Doritos Locos tacos from Taco Bell to pass around. Some people (okay, me) had iPads out to watch Game 7 of the Spurs/Heat series while they waited for their names to be called. Someone would come around the room to talk about the amount of support that the people waiting to testify had from around the world.

“People on the internet have ordered pizzas,” a blonde woman with some clear organizational and leadership skills would announce, leading people outside to an area where a dozen or more boxes from East Side Pies awaited. (Later in the night, it’d be Tiff’s Treats, or a giant Gatorade cooler full of coffee from Bennu.) Pizza, TV, jokes about the uncool kids who want to restrict abortion rights – it was fun.

Then the yelling starts. After Cook’s announcement, everything changes. Some people are immediately discouraged. Local feminist blogger Jessica Luther rushes over to the chamber to observe firsthand what’s going on – this isn’t something she wants to watch on a projector screen. “I wasn’t sure what was going to happen, and I wanted to physically be in that room, so that if he chose to end it, I could protest with my body,” she’ll say when she recalls packing up to enter the room. “I wanted to take up valuable space and document other people doing the same.”

Not long earlier, she’d been eating cookies and watching basketball. Now, she’s texting her husband, trying to make bail arrangements in the event that she’s arrested. Democratic Houston Rep. Jessica Farrar is trying to politely argue with her committee’s chair, but it’s not going well. “I just don’t understand how this testimony can be repetitive when it’s so personal,” she says. Cook doesn’t have an answer for her. Bored is bored.

The next speaker, a fiery woman with curly hair, steps up to the microphone and begins talking. The groans from the room subside as she does – people quiet down to hear her. She doesn’t disappoint them: her testimony is every bit as “impassioned” as Cook indicated, but she’s obviously going off-the-cuff here, talking about the chair’s decision to end testimony with so many hundreds of people from around the state, many of whom had been there for hours, waiting for their turn to speak. She doesn’t say any swear words, but it’s that sort of speech – she’s angry, like everyone else in the room.

Apparently it hurts Cook’s feelings, because he declares that, at that point, he’s had enough. He may have promised an hour, but he’s done. He walks out of the chamber. The sound in the overflow room and on the livestream on the internet is cut, but in the room, people are yelling at him. The word “coward” is heard more than once. Outside the meeting room, people keep asking the only relevant question they can think of: “Can he do that?” The answer isn’t coming inside that building, not at that minute.

Meanwhile, back in the room, the woman who was to be the next speaker has approached the microphone, and Department of Public Safety officers have blocked her access. The situation deteriorates as a chant of “Let her speak! Let her speak!” begins, and more officers enter the room. Finally, an impromptu decision is made by the people in the room – they’ll listen to each other speak, if that’s all they can do. People tell their stories, read their testimony, unplugged. There’s a sense of powerlessness, hopelessness, in the room. It’s hard not to draw parallels between the way the hearing is shaping up and the experience that the bill itself is intended to create for Texas women – taking the power to control your own life out of your hands.

There are maybe five or six speakers who talk this way before Cook reenters the room, agreeing to give speakers their hour. People are suddenly grateful to him – it’s hard not to marvel at how quickly the room has gone from having rights to being allowed to speak.

And ultimately, nothing changes. People give their testimony. Much of it is very compelling, but nobody’s really listening. That was the whole point of the filibuster. Yeah, get up and speak and tell your story, but we’re really just here to run out the clock. Now that that’s not an option, the whole exercise feels a bit hollow. That doesn’t stop anyone from having their say, though. The crowd’s dwindled by 4am, when things have wrapped up, but it’s no less impassioned.