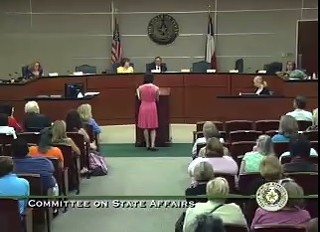 Offscreen: Another 690 or so speakers signed up on House Bill 60 as part of the People's Filibuster

If you're near a computer (which, if you're reading this, you patently are) then the best thing you could be doing with your bandwidth is watch the House Committee on State Affairs. It's democracy in action as 700 Texans have signed up for the citizen's filibuster: A determined effort to slow the abortion restrictions in House Bill 60.

The committee met today to discuss two bills, both by arch-conservative and perenial class act Rep. Jodie Laubenberg, R-Murphy: HB 16 (her latest attempt at fetal pain legislation) and HB 60, a backdoor effort to regulate abortion providers out of existence. But there's a determined fight in the committee chamber from members of the public to protect the fragile tatters of reproductive rights that Texas still provides.

It may seem like madness: After all, the GOP, which dominates the committee, is the party of anti-abortion politics. Gov. Rick Perry has thrown out the last ebbing celebrations of the 83rd session, aka the kumbaya legislature, by letting the anti-choice evangelicals lose. The GOP keeps filing anti-choice measures: Last week, Rep. Stefani Carter, R-Dallas, filed House Bill 66, which she claims is to "protect adolescents seeking judicial bypass for an abortion." In this measure, Carter wants to derail abortion rights for minors: More astonishingly, she would want all women to prove that they are not minors (not sure where the protection is there, but still.)

It's a done deal, right? Wrong. This afternoon NARAL Pro-Choice Texas announced they were mounting a de facto filibuster. Get enough people to speak out during public testimony, and the democratic process gets a sudden burst of openness.

So far, nearly half a day into the public input phase of the bill, an estimated 700 people have signed up. If they all use their three minutes, that's 35 hours of testimony. The questions now are simple: how many will speak, and how many more turn up to keep the debate going?

The most bizarre element of this evening has been watching pro-HB 60 supporters speaking out for the bill. As in, they are extending the filibuster. Their points have generally fallen into one of three categories. One, evangelical cant. Two, "I had my baby, you should have yours." Or three, the world was better before abortions.

Speakers against the bill have raised counterpoint after counterpoint; dismantling false arguments; derailing the idea that all Christians are anti-abortion; recounting often personal, painful stories; And making clear-cut legal and constitutional arguments that HB 60 is nothing more than an act of oppression.

This has been a monster effort, not just in mobilizing speakers. There's been a lengthy effort to keep the pro-choice army fed, watered and even supplied with cookies.

You can watch the entire affair via the House video/audio page (warning: you will need Realplayer) or track the events using the #hb60 hashtag