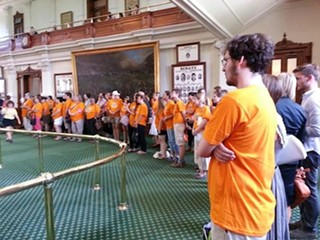 For supporters of reproductive rights in Texas, today is going to be a very long day. After a divisive set of abortion regulations were passed in the Senate Tuesday, the House State Affairs Committee is hearing testimony on the bill this afternoon. NARAL Pro-Choice Texas is using the opportunity to make sure their opposition gets heard.

The organizers are calling the action a "people's filibuster." The intent is to keep the hearing going as long as possible by filling the three minute slots with testimony against the bill. The action has attracted the support of the Texas Democratic Party. In a written statement today, Chairman Gilbert Hinojosa said "(Gov. Rick) Perry’s declaration of war will be met by a strong fight. The rights of women matter too much for us to not take action.”

The action is in response to Senate Bill 5's three measures that would add costly requirements to Texas abortion facilities. Reproductive rights advocates say the regulations are not only unnecessary, but will effectively close most Texas abortion providers. The bill requires that abortion clinics act as ambulatory service centers, that abortion doctors have nearby hospital admitting privileges, and that women seeking abortion have two in-person visits before the procedure is performed. A fourth requirement, banning abortion at 20 weeks due to "fetal pain," was dropped by author Sen. Glenn Hegar.

Although supporters of the regulations claim that they are necessary to protect women's health, opponents point out that no move has been made to regulate clinics providing other types of procedures, such as vasectomies, with similar risks. Pro-choice advocates say that such arguments hide the real agenda. Indeed, Lt. Gov. David Dewhurst became a progressive lightning rod yesterday after retweeting a Planned Parenthood infographic stating that the regulations would "essentially ban abortion state wide." His caption read " We fought to pass SB5 through the senate last night, and this is why."

NARAL Pro-Choice Texas Executive Director Heather Busby wants to give the conservative agenda some transparency. "This session the democratic process played out as it should have and procedural traditions kept extremist legislation from getting through. These traditions are in place to make sure government is representative of the whole, the mainstream. But our extremist governor and lieutenant governor decided to subvert the process and to play politics with women’s lives in a special session, rather than deal with more pressing concerns that matter most to Texans."

In fact, recent polling does suggest that the majority of Texans support at least some access to medical abortion. A new Texas Tribune/ University of Texas poll still shows a deep divide over abortion rights, but a slight majority favored less restrictive access. 36% stated abortion should be a matter of personal choice, with 13% favoring access when clear need is established. Only 16% of respondents believe that abortion should be banned altogether, even in cases of incest, rape, or threats to a woman's life.