How to navigate around the Republic of Texas Biker Rally 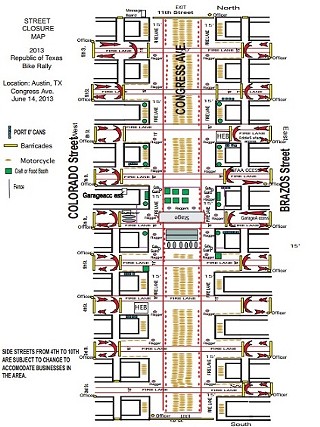 Are you anywhere near a road? Then you can probably hear the roar of engines in town for the Republic Texas Biker Rally. So prepare for major street closure downtown, exacerbated by Austin's newest tourist attraction: A big 'ol sinkhole on Cesar Chavez.

Most of the events will be out at ROT central at the Travis County Exposition Center on Decker Lane, but tonight there will be a free concert and party on Congress. Here's the basic skinny. If you're trying to drive anywhere on Congress between the Capitol and Ladybird Lake from 6pm tonight to 3am tomorrow, forget it.

So how are you supposed to get anywhere? The city is saying that southbound traffic can still take Colorado, while northbound Brazos will still be open. However, they recommend that you take alternate routes further out, such as Lamar, I-35, Red River and MoPac. As for east-west traffic, Cesar Chavez will be open, but if you're travelling at the other end of Congress, take the North side of the Capitol via 15th street (or steer completely clear, take MLK, and just be glad that UT is out.) In fact, the best advice, especially if you're heading Downtown, is probably to take public transport.

Oh, and don't forget one of the highlights of the night: The annual bike parade. It starts at the Expo Center on Decker Lane at 8pm, then take E. MLK to Webberville Road, a quick dog leg on Springdale to Oak Springs/Rosewood, before picking up E. 11th and heading down to Congress. There will be partial road closures, and it will be really, really tough/impossible to cross the parade route.

You can download the full map of the closures from the city website here, and the map of the parade route here.

Oh, and about Cesar Chavez: Of course, all of this is extra-complicated because that thoroughfare is closed at Red River because a sink hole has opened up. Yes, we at Newsdesk are quietly remembering all the times we warned everyone about Austin's crumbling infrastructure, but whatever.

And, yes, the sinkhole already has a Twitter feed.

General word of advice to visitors and residents, whether riding, driving or walking. Austin's roads can be lousy at the best of times, so please watch out for each other, especially with this many bikers on the road. Drivers, check your mirrors, and riders, stay out of blind spots. Last year, there were 175 crashes during ROT weekend: Out of five deaths, three included motorcycle fatalities. That doesn't include the 95 minor injuries recorded.

Oh, and another quick reminder: This weekend, Austin Police Department will be running a no refusal weekend, starting 9pm tonight through to 5am Sunday, June 16. Last ROT weekend, 104 people were arrested for DWI, and no-one's interested in breaking that record.

So, have a happy and safe ROT rally weekend. For more info, visit the City of Austin event page.