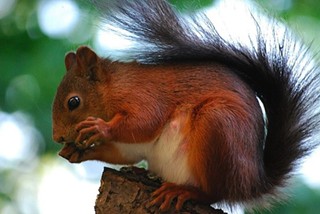 Barry Bone wants in on the ACL Fest money, Rick Perry celebrates the winter holidays, and Rick Reed issues a mea culpa. Grandstanding is on the News Ticker.

• Austin Planning and Development is having a weekend workshop to "re-imagine the Ben White corridor." We would suggest adding several water slides, but that may be summer heat getting to us.

• The Texas Civil Rights Project and Austin attorney Jeff Edwards are suing the Texas Department of Criminal Justice and the University of Texas Medical Branch for negligence in the heat stroke deaths of four prisoners.

• When walking under the ten upcoming downtown HALO cameras, remember that even though the cameras are recording, the footage is not being sent to the producers of America's Got Talent.

• After watching the most recent Batman movie, Austin's squirrel population has been itching for anarchy.

• Morning anchor Katherine Kisiel will be leaving Fox 7 at the end of the month. To save the station some money, Keri Bellacosa will now take on a Buñuelian dual role. The cooking sections will be cut too, the absence explained by a bevy of increasingly improbable interruptions.

• Former D.A. candidate Rick Reed has withdrawn his accusation that current Travis County D.A. Rosemary Lehmberg was involved in a hit-and-run accident the night of her DUI arrest. He added that Lehmberg was probably not responsible for the Hindenberg disaster, but he's still waiting to listen to the 911 tape.

• Earlier today, Gov. Rick Perry signed a bill into law that allows students to say "Merry Christmas" in way that does not encourage the establishment of a particular religion. The traditonal greeting for a black mass, which usually requires the use of a breath freshener, is still somewhat controversial.

• Among the attendees at the ceremonial signing were a Parrothead Santa Claus, cheerleaders sporting summer sandals, and the cloned boy Perry is raising to insure he still holds power in 2049.

• Gov. Perry has put the kibosh on expanding the special session to any more items, saying that the Lege should only be focused on issues that will make him look good to primary voters.

• In his crusade to abolish the I.R.S. and its convoluted forms, Sen. Ted Cruz asks you to fill out an equally complicated form so that he can get your money.