Before he spoke, Brown was introduced by emcee Robbie Ausley and praised by a trio of Democratic stalwarts: former state Rep Wilhelmina Delco, Austin ISD trustee Gina Hinojosa, and Chronicle columnist and former Ag Commissioner Jim Hightower. Delco emphasized Brown’s longtime activism and dedication – “Andy showed up!” she repeated – and emphasized his work for and inclusion of all members of the community. “He’s been there for us,” Delco said, “and we need to be there for him.” Hinojosa noted that contemporary politics are often polarizing, but in his years as party chair, Brown has eagerly reached out to everyone and shown that he can “bring people together.” Hightower described Brown as an “unabashedly progressive” candidate who would be a “can-opener” to “herd the Democratic cats” of Travis County – and ended by presenting the candidate with a signature 10-gallon hat like Hightower’s trademark own.

In his remarks, Brown called his Austin upbringing by “somewhat hippie parents” a “uniquely Austin love story”: “I grew up over dinner conversations about Barbara Jordan’s life, or the mistakes of Vietnam – I was given a worldview without ever leaving Austin.” He acknowledged his wife Sara Strother beside him, as well as his parents Don and Sharon in the crowd, and recalled his Democratic service in the Ann Richards campaign, in the youth-oriented 21st Century Democrats, as campaign manager for Congressman Lloyd Doggett (“when Tom DeLay tried to redistrict him out of a job”), as county party chair, and most recently, his work supporting state Sen. Kirk Watson and the Central Health Prop. 1 campaign, “to expand health care

That was all by way of his evening’s theme, doing things “the Travis County way.” He pointed to Doggett and Watson as defying the state Republican political winds to defend Austin’s congressional representation and to expand health care locally if not statewide. Speaking of GOP attempts to throttle local initiatives, Brown said, “We have a choice to make. Are we going to buckle and do it their way, or are we going to do it our way, the Travis County way?”

Brown described himself as the candidate to carry on that tradition, and specifically to succeed retiring incumbent Judge Sam Biscoe. He recalled the judge's prescription (delivered to the Chronicle earlier this year) for a successor; he needs in part to be "politically savvy," have the ability to "collaborate and cooperate" and "to prioritize," "to be fair … and project fairness," and to have "the patience and willingness to see the other side."

"I respect that advice," Brown said, "and frankly I credit that same advice to much of my success in life and politics."

In addition to his sustaining work with the Democratic Party, Brown cited his experience as an attorney, a clerk for a federal judge, and managing the local law firm he founded. In terms of a broad platform, Brown said he would work to support Lone Star Rail and commuter rail, expand county mental health care, build a countywide firefighting system, and protect natural resources, especially water in a time of drought. He also called for the creation of a county Ethics Commission: “It’s time to be 100% transparent, and a 100% online.”

Brown asked the crowd to join him in his campaign, and in his efforts to support and improve Travis County. “Look at the number of grassroots activists around you,” he told the crowd. “It’s not about me, it’s about us. We understand that this is a community effort to protect the Travis County that we love.”

The evening’s festivities had begun with a brace of tunes by venerable Austin singer-songwriter Bill Oliver, and closed with a set by the Heartless Bastards – by way of introduction, Brown joked that he was not referring to “statewide politicians.” Among the more than 500 people assembled in the bright evening Threadgills sun were a host of local politicos – most, but not all, wearing “Andy Brown” or “AB” stickers of one kind or another.

Prominent among the early arrivals was Mayor Lee Leffingwell, who said that he was supporting Brown in part because of his long record of service to the Travis County party, "without much reward." He said the race against Eckhardt would be "no cakewalk," and that she'll be a "strong candidate," and supported by retired state Sen. Gonzalo Barrientos, "who will certainly help her among Hispanic voters." With a smile he said, "Sometimes you just have to choose sides, and I'm supporting Andy."

And there will be plenty more evenings like this one before the March 2014 Democratic primary, when Brown will face former Pct. 2 Commissioner Eckhardt, who stepped down to run to replace Biscoe. The day before Brown's formal announcement, Biscoe, who had started the line moving by announcing he would retire at the end of his current term, appointed former Austin mayor (and former county commissioner) Bruce Todd to complete Eckhardt’s unexpired term. 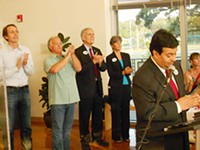