The Republican Party of Texas is in trouble when it comes to minority support. So it doesn't help when one of their leading Tea Party activists says the GOP doesn't want more black Texans at the ballot box.

The head-shaking quote came from Ken Emanuelson, a Tea Party activist with deep connections to the Dallas County Republican Party. He was leading a meeting of Battlefield Dallas County, the GOP's response to Battleground Texas, the new Democratic group aiming at the grand target of turning Texas blue. The RPT is terrified of Battleground Texas (at the meeting, RPT chair Steve Munisteri actually thanked the absent Democrats for doing something that he could never manage: Getting the Republican National Committee to commit cash to Texas "Get-Out-The-Vote" operations.) But Republicans are more worried about demographics than Democratic activists. The simple fact is that minority voter participation is rising, and minorities tend not to vote Republican.

Rather than proclaiming Dallas County a GOP safe haven for Republicans, Emanuelson fired a warning shot across his own party's bows by calling it "absolutely contested territory." However, his plans to motivate everyone in the room fell short when he took a harmless but significant question from John Lawson, pastor of Children of God Ministry in Dallas. Lawson is no screaming liberal (in fact, he is a regular correspondent for texasgopvote.com), and so he simply asked, "What are the Republicans doing to get black people to vote?"

Emanuelson's response: "Well, I'm going to be real honest with you. The Republican Party doesn't want black people to vote if they're going to vote nine to one for Democrats."

Here's the audio of the exchange:

Lawson continued, "Well, what are you doing to get them to vote differently?"

"That is the more important question," said Emanuelson, who argued that the party won't be able to make real dents into minority voting patterns before 2014.

His phrasing was at best inartful. So, unsurprisingly, Democrats leapt on Emanuelson's comments (not least Battleground Texas: Emanuelson has raised their profile above just the background morass of fly-by-night GOTV groups.) Similarly, Congressman Marc Veasey, D-Fort Worth, responded, "Well, I am going to be real honest with you, Mr. Emanuelson – the Republican Party discounts communities of color at their own peril and attacks like these only serve to embolden us for the long road ahead."

Even less surprisingly, Emanuelson took a break from filling his Twitter feed with anti-immigration reform/anti-IRS cant to distance himself from his own comments. In an email to Wayne Slater at the Dallas Morning News, he wrote that it was a "mistake", that he was simply expressing a personal opinion, and since he does not hold a position with the RPT, he should not have spoken on the issue.

Huh. That's interesting, since Emanuelson and Dallas County Republican Party vice-chair Lisa Perdue, were heading up the grassroots discussion part of the meeting.

Digging his hole ever deeper, Emanuelson wrote, "What I meant, and should have said, is that it is not, in my personal opinion, in the interests of the Republican Party to spend its own time and energy working to generally increase the number of Democratic voters at the polls, and at this point in time, nine of every ten African American voters cast their votes for the Democratic Party."

It's a bad time for the GOP's minority outreach (and we're not just talking about Judge Edith Jones racial ruminations.) In May, the Tampa Bay Times obtained a letter from former Republican Party of Florida Minority Outreach Coordinator Pablo Pantoja, saying he was quitting the Republican Party to become a Democrat. His reason? The GOP is too tolerant of passive and active racists within its ranks.

In his letter, Pantoja wrote, "Some Republican leaders have blandly (if at all) denied and distanced themselves from this but it doesn’t take away from the culture within the ranks of intolerance. The pseudo-apologies appear to be a quick fix to deep-rooted issues in the Republican Party in hopes that it will soon pass and be forgotten." The quick consensus was that he was quitting over a Heritage Foundation study claiming that Hispanic people will always have low IQs. However, Pantoja continued, "We are not looking at an isolated incident of rhetoric or research."

Wonder what he would make of Emanuelson's little faux pas. 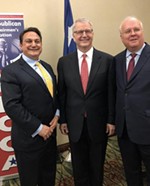