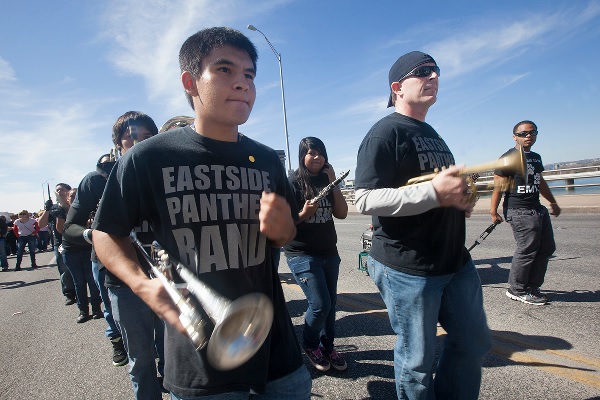 Eastside Panther Band: Just one of the arguments for campus success and spirit that campus supporters hope that Commissioner Michael Williams is thinking about when he rules on the school's future (Photo by Jana Birchum)

The next few days will be make-or-break for Eastside Memorial High School, as Commissioner of Education Michael Williams issues his ruling on the school's fate. Community members hope he'll see all the positives about the campus.

On May 6, the Austin ISD board of trustees picked Johns Hopkins Talent Development Secondary program to be their partner at the campus. The plan is to build on the successes, not impose yet another educational model. For the community, it's a matter of Panther pride. They've been putting their paws up to show their support and their hard work, and they just want the commissioner to let them get them back down on the ground and get back to hunting higher scores, bigger graduating classes, and a brighter future.

As the Eastside graduating class takes to the stage at the Frank Erwin Center tonight, school boosters hope they will be among the first and not the last. If Williams agrees to let the campus be operated in partnership, then there will be a lot of work to do. The campus' problems have been widely reported: But less headline-grabbing have been its successes. Community members argue the district should have been talking about them for years. Instead, there's a feeling that the district has spread a feeling of negativity. It's been hard for students to feel up-beat when the district has sounded like it is tolling the bell.

Take every board agenda item about Eastside for the last two years: They start with a four page litany of doom and gloom, starting in 2008 with Johnston High School being rated Academically Unacceptable for the fifth year running, through to the administration being "concerned about the ability of the proposed partner to meet the performance requirements of the Commissioner."

Austin ISD Board President Vince Torres said he took community concerns about negativity very seriously. He said that the historical context component had only been included to give context, and since the board officially voted to move forward with Johns Hopkins, that it has been dropped as inessential. He said that the official rhetoric has very much been shaped by what is in the Texas Education Agency files, "and often times we have to make sure that we're reflecting what they're saying to us." However, moving forward, he saw hopes for a new environment and new tone of discussion, and that it would be guided by a new model that "both respects the community's desire to support this new plan, but also recognizes that there are some improvements occurring at the school as a result of work that has gone on at the school in the last couple of years."

Education Austin President Ken Zarifis said there is a narrative: "'This is a low performing school in a broken feeder, everything is negative.' Yet we know that really good things are happening in spite of all the things that have happened over the last couple of years."

These have been tumultuous times. Since the campus was re-opened as Eastside Memorial in 2008, it has been reconfigured three times. In the midst of that upheaval, its most popular and successful principal, Connor Grady was removed by the administration. After his departure, there were three principals in 18 months, and nothing damages student performance like leadership and staff shakeups.

But amidst all of this, there's one truth. Eastside's last ranking on the state accountability system gauged it Academically Acceptable. The rhetoric that it is a multi-year Academically Unacceptable campus was true five years ago, but not any more. There have been big gains have been in the TAKS scores, especially the all-important 11th grade exit scores. Preliminary scores are in for 2012-13, and if the old state accountability system had been in place, Eastside would have been two points shy of being a recommended campus. While these are still only preliminary numbers, they are unlikely to shift radically, or by more than a current of points.

Then there are highlights of the enrichment programs, like the Eastside Panther Band performing at Rachel Ray's SXSW Feedback party. Or the highly-regarded and award-winning Eastside Memorial High School Engineering and Robotics team, which beat all other Austin teams at the FIRST Robotics Competition. As the student team captain put it, "We have a bad reputation, but it's not because we did it. It's because people put it over us."

Williams has voiced concerns about the state of Eastside's middle school feeders, and whether there has been enough effort to truly align them with the secondary program. The board and the district have arguably dramatically undersold how much work has been going on around science, technology engineering and mathematics in the past couple of years. Austin Voices in Education executive Director Allen Weeks praised the work by those middle school principals, and said, "They've got lots going on about STEM, and they've done lots of planning."

Weeks is also eager to discourage the public myth that Eastside is hemorrhaging students to other campus: In fact, while students are going to other highs, such as Reagan and Austin, 107 kids have transferred to Eastside from other attendance zones. Weeks said "I think if Eastside started pulling in students the way Reagan has, in four or five years they would be at 1,100 kids."

There's an undertow of criticism that says that kids are only staying because they had nowhere else to go. One Eastside parent with a child with a learning disability countered that argument, saying she had made the active choice to keep her child at the campus where she is flourishing. She said, "Had I thought about taking my daughter out of that school before? It has crossed my mind. But it's the family atmosphere, how my daughter has felt there."

And then there is the more nebulous, harder-to-define efforts from the community. Staff, students and parents have turned up first thing in the morning to sign up to speak at board meetings last thing at night. Students have pushed their scores up, created videos, campaigned, pushed and struggled. Parents participated in the process to select Johns Hopkins. Zarifis said, "These are the kids that have been involved in civil participation, and their scores are strong. Is there a correlation there? I don't know, but it sure seems that these are kids that are vested in their school."

At some levels, it's a matter of perspective. Superintendent Meria Carstarphen has said that the social studies scores have stalled: But, as Zarifis sees it, it's hard to see big improvements when the pass rates have been over 94% since the 2009-10 school year.

So when parents and teachers gather tonight to celebrate the achievements their kids have made and continue to make, they hope that Williams will be see all those paws in the air. 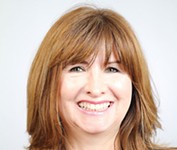