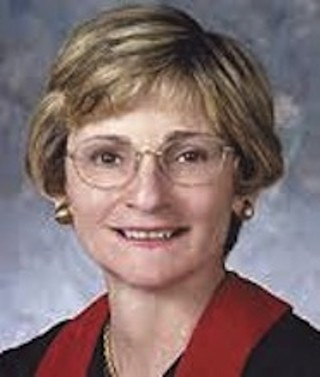 A complaint filed today by several civil rights groups, including one funded entirely by the government of Mexico, alleges that federal Judge Edith Jones has violated her duty to be impartial and damaged the public's confidence in the judiciary, in statements she made in a public lecture – including that blacks and Hispanics are more violent.

Indeed, Jones also said that a death sentence provides a public service by allowing an inmate to "make peace with God."

Jones, who sits on the 5th U.S. Circuit Court of Appeals – based in New Orleans, its jurisdiction includes Texas – made numerous offensive and biased comments during a February lecture at the University of Pennsylvania School of Law, according to the complaint filed pursuant to the federal Judicial Conduct and Disability Act. The complaint, filed by the Texas Civil Rights Project, Austin NAACP, the League of United Latin American Citizens (LULAC), and the Mexican Capital Legal Assistance Program (among others) alleges that during her talk – billed as "Federal Death Penalty Review with Judge Edith Jones (5th Cir.)" – Jones violated a number of canons of the code of conduct for federal judges.

The lecture was not recorded, but witnesses recalled a number of Jones' controversial statements. The views she expressed included not only that minorities are responsible for more violent crime than are whites, but also that claims by death row inmates that racism or arbitrariness infected their prosecutions, or that they are actually innocent or even mentally retarded, are merely "red herrings," according to those who attended the lecture. She told the law students and other attendees that she thought the U.S. Supreme Court's ruling outlawing the death penalty for the mentally retarded did intellectually disabled individuals a disservice, and that to create such an exemption from execution was a "slippery slope," reads the complaint. "In describing … what Judge Jones said about these cases, I am not able to capture the complete outrage she expressed over the crimes or the disgust she evinced over the defense raised, particularly by the defendants who claimed to be mentally retarded," reads the declaration, filed with the complaint, of veteran Pennsylvania-based death penalty attorney Marc Bookman, who attended the lecture. "Judge Jones's disgust at how these defendants were 'using mental retardation' was very evident and very disconcerting," reads the complaint.

Further, Jones "denigrated" the system of justice in Mexico and said it was an "insult" when the U.S. considered laws in other countries when looking at the death penalty – presumably including in Mexico, where capital punishment was outlawed in 2005. Jones also told the audience that "any Mexican National would rather be on death row in the United States than in a Mexican prison," reads the complaint, and indicated that the U.S. provides Mexican citizens more legal protections than does their own system of justice. Moreover, according to the complaint, Jones referred to her personal religious views as justification for the death penalty. A killer is "only likely to make peace with God and the victim's family in that moment when the killer faces imminent execution," she said – a proposition that she said she found evidence for in an article she and her husband found online called "Hanging Concentrates the Mind." (Apparently by Rev. George W. Rutler, in the Catholic magazine Crisis, Feb. 8, 2013.)

Moreover, according to the complaint, Jones asserted as fact the proposition that blacks and Hispanics are more likely to commit violent crimes. When asked to explain her comments, "she stated that there was 'no arguing' that 'Blacks and Hispanics' outnumber 'Anglos' on death row and 'sadly' it was a 'statistical fact' that people 'from these racial groups get involved in more violent crime,'" reads the complaint. As an example, she noted that it is a "fact" that "'a lot of Hispanic people [are] involved in drug trafficking' which itself 'involved a lot of violent crime.'" According to the complaint, when the lecture host abruptly ended the question-and-answer portion of the program Jones 'lost her composure.'"

Jones' comments about race and crime not only demonstrate an "utter disregard for the fundamental judicial standard of impartiality," but her comments also touch directly on an issue pending in the ongoing case of Duane Buck, a death row inmate who has been fighting to get a new sentencing hearing based on the fact that racially biased statements were allowed into testimony. In that case, a psychologist, Walter Quijano, testified that blacks, such as Buck, are more violent – and thus present an ongoing danger to society, whether inside or outside prison (a question jurors must consider when determining whether to deliver a death sentence). Indeed, Buck's case is one of six in which Quijano testified as such. When the comments in those cases came to light, in 2000, then-Texas Attorney General John Cornyn declared that the state would not stand in the way of new sentencing hearings in each of those cases. "The people of Texas want and deserve a system that affords the same fairness to everyone," Cornyn said in a June 2000 press release. "I will continue to do everything I can to assure Texans of our commitment to an equitable criminal justice system."

Buck's case was treated differently at the time because of its posture on appeal. The case is ongoing, and, ultimately, will make its way to the Fifth Circuit for review.

Indeed, according to the complaint, Jones made direct comments on several cases that have not yet made it all the way through the appeals process – cases on which she may judge, or has already sat in judgment, including the Texas death row cases of Larry Swearingen and Elroy Chester. Jones authored the January 2012 opinion denying relief to Chester, whose lawyers have argued he is too intellectually deficient to be legally executed; Chester is slated for execution June 12. In the case of Swearingen, sentenced to die for a murder that, his lawyers argue, biological evidence in the form of preserved tissue samples demonstrates he could not have committed because he was already in jail at the time of the victim's death, Jones was part of the three-judge panel that concluded that Swearingen could have discovered this evidence years ago and that, nonetheless, if true it would not have persuaded jurors to acquit him of the crime. That opinion notwithstanding, Swearingen's execution was stayed by Texas' Court of Criminal Appeals and sent back to district court for a further vetting of the science; his execution date was again withdrawn, in February, in order to allow time for new DNA testing.

Jones, 64, was appointed to the Fifth Circuit in 1985 by President Ronald Reagan. The UT Law graduate is an opponent of abortion rights and a supporter of efforts to streamline appeals in death penalty cases. She was twice mentioned as a potential nominee to the U.S. Supreme Court – first during the presidency of George H.W. Bush (who chose David Souter to fill the spot in question), and in 2005, Jones' name resurfaced as a possible nominee of President George W. Bush.

Complaints such as the one against Jones, signed also by a selection of nationally recognized legal ethicists, are filed with the chief judge of the court of appeals in the circuit where the judge at issue sits – in this case, the complaint goes to Carl Stewart, the current chief judge of the Fifth Circuit. Upon review of the complaint, Stewart is tasked with determining whether it should be dismissed, whether to take corrective action, or whether to appoint a special committee to investigate the allegations. In this case, the filers are asking that the complaint be referred to another circuit for consideration – which, if granted, would remove the matter from Stewart and the Fifth Circuit.

More than a 1,000 judicial complaints were filed each year since 2009, with 1,404 filed in 2011 – the most recent year for which complete numbers are available. That same year more than 1,454 complaints were disposed of (including carry-over complaints from previous years), most – 777 – by dismissal. According to federal statistics, the majority of complaints were filed against federal district judges. Most of those were made in response to alleged "erroneous decisions, other misconduct, personal bias against the litigants or attorneys, or violations of other standards," according to a report by the Administrative Office of the United States Courts. Forty-percent of those complaints were filed by prison inmates. In all, just two dozen complaints received by circuit chief judges were resolved – including cases where corrective action was taken. At the end of the year, 912 cases were still pending; none of the 2011 complaints were referred to a special investigating committee for consideration. After a special committee has completed its investigation, the results are filed with the judicial council, a disciplinary arm of the federal courts. Of the complaints considered in 2011 by judicial council, 644 were concluded after the panel agreed with the chief judge's initial decision.

In a detailed affidavit, James McCormack, a legal ethicist, former general counsel and chief disciplinary counsel for the State Bar of Texas, writes that the content of Jones' speech violates a number of ethical provisions within the judicial code of conduct – including the duty to be impartial; to avoid comment on pending, or impending cases; to be respectful and "avoid comment or behavior that could be interpreted as harassment, prejudice or bias,"; and to avoid participating in "extrajudicial activities that detract from the dignity" of the judge's office or would "reflect adversely on the judge's impartiality." In sum, McCormack concluded that Jones has engaged in "cognizable misconduct," he wrote. "Her inflammatory remarks evince bias and prejudice and serve to lower public confidence in our judiciary," reads the affidavit. "I view this episode as a very sad and unfortunate chapter in the history of our federal judiciary. Most federal judges strive mightily to act fairly and impartially and to strengthen, rather than erode, public confidence in our system of justice," he continued. "Judge Jones's conduct militates in the opposite direction. In my opinion, unless an appropriate disciplinary authority strongly disapproves of … Jones's statements and properly addresses her flagrant misconduct, our judicial system – and our federal appellate courts in particular – will suffer the consequences of diminished public respect and confidence."