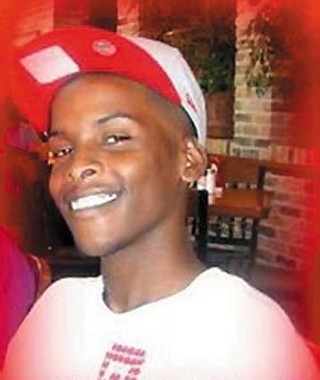 UPDATE: When Officer Shana Howell saw her friend and colleague Officer Jeffrey Rodriguez sitting on the side of East EIghth Street she "just felt terrified," she testified Tuesday afternoon. He was grabbing his ankle, sweating profusely, and disoriented.

Just minutes before she'd heard Rodriguez come across the police radio, screaming. "He said that there's a red car [driving] northbound on the frontage road [of I-35] and it should have bullet holes in it," she recalled, tearing up while testifying about the officer-involved shooting death of Byron Carter, 20, on the night of May 30, 2011.

Howell was the third witness to testify on the first day of the civil rights trial of Officer Nathan Wagner, who shot and killed Carter who was a passenger in a car driven by his friend, 16-year-old Leyumba Webb, just more than two years ago. At issue is whether Wagner was justified in firing five rounds into Webb's vehicle as he attempted to pull away from a parallel parking spot on Eighth St. just East of Downtown.

Wagner, who testified earlier today, and Rodriguez, who testified just after lunch, both say that Webb purposely steered the car toward Rodriguez in an attempt to hit him. Carter's family's attorney, Adam Loewy, contends that the officers surreptitiously followed the pair for no apparent reason using the cover of darkness on a steep street to mask their movements before appearing in front of the car just as Webb was pulling out. Carter and Webb were startled, Loewy contends, and were only trying to get away, not to hurt anyone. Ultimately, Wagner fired five shots into the car. One struck Webb in the arm, four struck Carter who died as a result.

"The engine roared; it was very loud," Wagner recalled of the night of May 30, 2011, when he fired into a car being driven by Leyumba Webb, a 16-year-old friend of Carter's with whom Carter, 20, was riding that night. The car suddenly "lurched forward" and struck the rear bumper of an SUV Wagner was standing next to, he said. "It was...dramatic." He yelled out, "'Hey! Police!'" in an attempt to get the car to stop, but he isn't sure anyone heard him. It was then that he saw Rodriguez, who was standing near the right front bumper of Webb's car, drop to the ground. Wagner believed his friend had been hit: "From where I was standing...he's there in front of it. He goes straight down; he yells, and I can see less and less of him as he goes down," Wagner told the jury.

The only reason Wagner fired his weapon was to stop the car and prevent Rodriguez from being dragged, he said. In all, Wagner fired five rounds into the car in just over 1.4 seconds. One round, the first, entered the car through the vehicle inspection sticker and into the driver side of the vehicle; the remaining four rounds entered the driver side window area but instead of hitting Webb they struck Carter, the passenger, killing him. Webb's seat was apparently reclined far enough that he was out of the line of fire.

Wagner and Rodriguez were on a proactive patrol assignment, looking for suspicious activity – including for individuals burglarizing vehicles – in the area just East of I-35 near Eighth Street in Downtown on the evening of the fatal shooting. The pair spotted Carter and Webb walking and looking suspicious – they were "walking together, looking around in all directions," Wagner said, "not just where they're going, but everywhere" – and decided to see where they were going.

The officers lost sight of the two near the frontage road and East Eighth, where the street ascends a large hill. Wagner said he figured they'd lost the pair, but should walk up the hill to check on the cars parked there – most parked facing against the flow of traffic up the hill, technically a parking violation.

It was as they climbed the hill that Wagner spied the running lights on a red car being driven by Webb. The cops were walking in the street to avoid being backlit by a streetlight so Wagner flashed his light at the car's occupants to get their attention, he said. It was then that he saw the car begin to move, violently, he described it, from the parking spot toward him and Rodriguez. That's when he decided to fire his weapon, he said, which he didn't have time to fully aim at his target.

Judge Lee Yeakel ruled this morning that neither a memo penned by Police Monitor Margo Frasier, nor a memo prepared by the Citizen Review Panel concerning the May 2011 police shooting death of Byron Carter will be allowed into evidence before the jury considering the civil rights suit brought by Carter's family.

Neither memo reflects information gathered as a result of independent investigation of the shooting death of Carter by Austin Police Officer Nathan Wagner, Yeakel ruled. And neither memo – each of which called into question, to varying degree, whether Wagner was justified in firing into the car that Carter was riding in the night of May 30, 2011 – is "trustworthy" as would be required by federal rules of evidence.

After the ruling lawyers for both the Carter family and for Wagner made opening statements. To the Carter attorney, Adam Loewy, the shooting is a perfect example of government intrusion in the extreme. To Robert Icenhauer-Ramirez, the shooting resulted from reckless actions taken by the driver, Carter's friend Leyumba Webb and by Carter himself. Police officers need to be able to defend themselves, he told the jury.

Testimony in the case is now underway, with Wagner the first witness called to the stand.

Conclusions of the city's Citizen Review Panel in the officer-involved shooting case of Byron Carter – including that Officer Nathan Wagner had no reason to use lethal force to stop the car in which Carter was a passenger the night he died – are unreliable, Austin Police Chief Art Acevedo testified in federal court Monday afternoon.

The problem is that the conclusions are reached by civilians who have limited experience with complex, critical policing events. "This is like an opinion poll of people who have no expertise," he said.

Indeed, Acevedo said that to allow a memo containing the CRP conclusions into evidence would only confuse jurors seated in federal court Monday morning, and tasked with determining whether Wagner violated Carter's civil rights when he shot and killed him on May 30, 2011. The memo was "prepared by people with zero expertise in policy issues," he said. "You have to take it for what it is."

Carter was the passenger in a car driven by his teen friend, Leyumba Webb, when police say Webb accelerated his car toward Wagner and his partner Officer Jeffrey Rodriguez; Wagner believed Rodriguez had been hit and was being dragged by the car so he fired a round of bullets into the dark car. Webb's arm was hit by one bullet; four struck Carter, including one bullet in the head and one in the thigh, killing him. Carter's family, represented in court by attorney Adam Loewy, argues that the police followed Webb and Carter along a darkened street for no reason and concealed themselves so that neither Webb nor Carter would know they were being tailed. It wasn't until after the pair got into their vehicle, parked along East Eighth Street, near Downtown, that they finally spotted the officers – and then it was not clear that they were cops, Loewy argues. Webb and Carter, who were not doing anything illegal, panicked and tried to get away. Webb did not try to injure anyone, Loewy says. Carter's family is suing Wagner in federal court for violating Carter's Fourth Amendment right to be free from the use of excessive force.

Wagner was cleared of any criminal wrongdoing by a Travis County grand jury and Acevedo declined to mete out any discipline in connection with the deadly encounter, clearing Wagner of any policy violations.

A jury that will hear the case was chosen Monday morning, but testimony in the case won't kick off until sometime today – after Yeakel rules on whether the CRP memo and a memo prepared for the CRP by Police Monitor Margo Frasier should be allowed into evidence. The CRP memo includes 11 conclusions that place blame for the fatal shooting squarely on Wagner; Frasier's memo is less critical, but does conclude that Wagner violated state law and APD policy by repeatedly firing his weapon into the car Webb was driving. "[T]he [monitor] is of the opinion that Officer Wagner firing into the vehicle when he was aware there was a passenger and that he could not see the occupants (including his intended target, the driver) through the tinted windows of a rapidly accelerating vehicle constituted a violation of APD policy and state law. At the least, he ought to have been aware of the substantial and unjustifiable risk created by firing into a vehicle under these circumstances that he might strike the passenger, which he did four times," reads the memo.

Because Wagner faced no sanction for his actions, neither memo has been released to the public, pursuant to an agreement between the city and the police union, which governs the city's version of police oversight.

It is immaterial if Acevedo agrees with Frasier, or the CRP, about whether Wagner violated department policy or state law because neither Texas law nor APD policy are at issue in this case, Wagner's attorney Robert Icenhauer-Ramirez pointed out during questioning of Frasier and Acevedo. Rather, the question is whether Wagner violated Carter's constitutional rights. APD policy sets a higher standard for officer conduct, Frasier agreed, than does federal constitutional law. As such, Acevedo agreed with Icenhauer-Ramirez that including into evidence either memo would do nothing more than confuse the jurors bound to consider whether Wagner violated federal law.

Yeakel will make his ruling this morning. Opening arguments and testimony will follow.