Austin And the Wider World 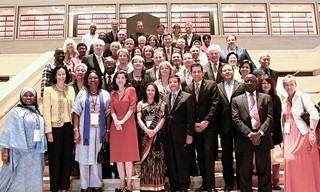 Many Austinites already know that their city is one of the more truly international urban centers in Texas, but a visit by 26 ambassadors last week re-enforced that idea.

The trip was part of the US State Department's Experience America program, and was the 11th such visit to a major US city since the program was set up in 2007. Organized by the Diplomatic Partnerships Division of the Office of the Chief of Protocol, its purpose is very simple: To get ambassadors from a multitude of countries (currently 100 participants and counting) away from DC and out into the rest of the country. It's not all Chicago, New Orleans and LA: Last October, ambassadors from 45 nations got to take in the sights of Bentonville, Arkansas (coincidentally, home of WalMart.)

This time, the assemblage of 26 ambassadors visiting Texas came from established powers like Germany and Ireland, rising nations like the Philippines and Ukraine, and smaller, often more troubled countries like Kazakhstan and the Kingdom of Lesotho. Theirs was a two-day whirlwind tour of the Hill Country on May 13-14, taking in the LBJ Presidential Library with Luci Baines Johnson, a trip to the Chestnut Community Redevelopment Project and the Texas Advanced Computing Center, and finally a lunch, hosted by the Greater Austin Chamber of Commerce at the Driskill Hotel.

This wasn't just a quick trip for bbq. Instead, the trip was supposed to highlight the technology component of Austin's economy. That was highlighted by the chamber's lunch/sales pitch to the assembled diplomatic cadre, with speakers from Dell, Google, and AT&T.

It was a strange context in which to hear the traditional brag that Texas, if it was a separate nation state, would have the world's 16th biggest economy (just imagine the agony of watching Gov. Rick Perry work out which GOP apparatchiks to dispatch as diplomats to foreign nations. The mind reels.) Then there is the disconnect between 'the Texas economic miracle' and one of its prime drivers of economic growth. The Austin tech hub is arguably restricted to Austin (which, if Texas ever quit the union, would become the 50th state by itself.) It's a blunt reality that it's a lot easier to convince a developer in, say San Francisco, to move to Austin than Fort Worth.

"I heard similar remarks before," said His Excellency Peter Ammon, German Ambassador to the United States. He described Austin's international reputation, and that of Texas, as "a place full of energy in a double sense. People are energetic, and there's an energy revolution going on."

Germany is looking at Texas as an investment opportunity. Europe is still the biggest single international investor in Germany, and there are long-running negotiations for a US-European free trade agreement. Ammon said, "We are about to enter a second phase of globalization, one which will allow more investment, more technology, and more clever trained people being able to cross borders, which will be to the advantage of us all."

However, there is always the problem of a brain drain, and a fear that Europe could just become a supplier of talent and capital to bolster the Texas economy. That's a concern Ammon has heard from German investors in the US. He said, "I spoke with the CEOs of these companies, and asked them what is your main concern here? What do you need me to tell the American administration? I thought of all kind of things, but they said, 'Number one, number two, number three is all the same thing. We need skilled labor. Either America is able to produce this skilled workforce, or it should open up its borders and let these people in."

Europe may be the biggest single foreign investor in US industry, but Asia and the Pacific Rim nations remain the single biggest supplier of good. For example, Singapore was the first Asian nation to have a free trade agreement with the US. According to Ambassador Ashok Kumar Mirpuri, "So many of the connection are across the Pacific: Korea, Japan, China, South-East Asia. A company like Dell is so entrenched in Singapore, is so much a part of Singapore culture." Moreover, while Texas may cling to the 'third coast' notion, he said, "Austin is very closely connected with Silicon Valley, and Silicon Valley is closely connected across the Pacific." He calls the Asian consumer a significant market for US, and notes that there are a large number of Asian students studying in the US, then returning home. As much as their degrees, he said, "They're picking up a certain entrepreneur spirit."

But Texas, with its reductionist view of racial politics (tick one of three boxes: White, African-American, Hispanic) has been slow to adapt to a new reality: That Asian-Americans are the state's fastest growing demographic. Mirpuri said, "The politics will start to integrate and assimilate these people, as they have in New York and California. Now you see members of Congress who are of Asian-American origin. Congressmen from these states have to now pay attention to the Asian-American constituencies that they have, and that's really a Pacific-facing community. I think Texas will start to see that as well."

In a generally convivial lunch, there was well-mannered tension when ambasssadors for two African nations wondered how Austin is presenting itself to the continent. Currently, the US commercial presence is relatively light: That could be a dangerous misstep, as both France and China have taken deep commercial and neo-imperial interest in the continent's reserves of exotic metals – many essential for modern technology. That's a major long-term concern for any US-based tech firm, and for anyone interested in the long-term stability of the region (for more on this, listen to our interview with documentarian Mads Brugger.) As His Excellency Daouda Diabate, ambassador for Cote D'Ivoire put it, there is still space for the US in Africa, but he added, "I just want to invite you to be there before it is too late."

Ammon called the continent a place of great opportunity, and that the West has to abandon any remaining shreds of colonialism. He said, "What we cannot do, I believe, is go back to the Nineteenth century and its politics. We have to see Africa as a chance, and not as a place where we can enrich ourselves."