A Second Chance for Drug Dealers on 'The Corner' 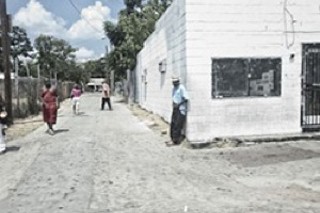 Sarah* didn't even know that the cops had tagged her, dealing dope near the corner of East 12th and Chicon Streets in the heart of Central East Austin, until she got the letter. On the letterhead of Austin Police Chief Art Acevedo and Travis County District Attorney Rosemary Lehmberg, it had a simple message: We got you.

"After an extensive undercover campaign, you have been identified as a street level drug dealer in the 12th and Chicon area," reads the letter. "As Chief of Police and District Attorney, we know that you are involved in selling drugs on the street, but we want to try something different to get you to stop selling drugs." Even though there is "evidence of you dealing illegal drugs," the letter continues, "we want to give you an option to completely stop selling drugs." Do that, the letter goes on to say, and the case that is currently waiting to be filed will go away.** Come back to the East 12th and Chicon area – or anywhere else in the city – to deal drugs and you will be prosecuted, to the fullest extent of the law.

That letter was sent to 31 lower level dealers, including Sarah, as part of a nearly year-long effort to close the open-air drug market, and associated crime, that has for decades plagued The Corner and surrounding neighborhoods. The letter, and the May 7 meeting for recipients and their so-called "influentials" – family and/or friends who would encourage the recipient dealer to give up the life – are hallmarks of the Drug Market Intervention strategy currently being used for the first time in Austin thanks to the efforts of a coalition of stakeholders, including the APD, Travis County DA's office, social service providers, faith leaders, and community members. The ultimate goal is to shut down the street dealing, but in the process to offer low-level offenders the chance to access social services they might need to keep them off the streets for good – including access to housing, education, counseling, and job placement assistance.

"Drug dealing doesn't offend the city, it doesn't offend the government, it offends the people who live here and raise families here," APD Commander Fred Fletcher told the more than 100 people gathered at Mission: Possible! Tuesday evening for the DMI call-in. "You have a unique opportunity; we want to offer you a chance to make amends" to the neighbors who have been "offended" by the ongoing, public drug dealing in the neighborhood.

We first wrote about the DMI strategy in July 2012, including comments from Scottie Ivory, a well-known and veteran East 12th neighbor who told us she felt as though traditional policing had failed the neighborhood and that she didn't feel that anyone – neither city nor county officials – really cared at all about what happened in the neighborhood she's called home for more than 60 years. On Tuesday evening she told the gathered neighbors, service providers, police, offenders and their families, that her neighborhood was once a proud and self-sustaining African American neighborhood that had fallen victim to drugs and decay – but that she sees it could rise again. "I've been part of the past, I am part of the present, and I will be part of the future" of the neighborhood, she said.

For Sarah, the letter came nearly a year after she was finally able, with considerable help and support from her daughter, to get off the street and out of the life. "I used to think that using crack on the streets was normal," she said after the meeting. "Now that I'm off the street I know what normal really is." Sarah has stayed clean, gained weight, and has moved to another Texas city, far from the corner where she'd gotten herself into trouble on so many occasions. The letter, notifying her of the case police made against her last year – that will be torn up if she stays out of trouble – is just another incentive to stay clean, she said.

For the offenders who received the letter – low-level dealers without any history of violence – there is a second chance. But for others, 20 chronic, violent offenders, there is no such offer: This group of offenders, also popped during weeks of concentrated undercover and patrol-level work by APD, are being prosecuted to the fullest extent of the law, First Assistant D.A. John Neal told the crowd, their mug shots lined up on chairs behind him. These individuals have "been arrested, are in jail, and are going to be sent to the penitentiary," he said.

Sarah's situation is not typical of the offenders summoned by letter to the Tuesday night meeting. In total, roughly a dozen of the letter recipients signed in as present at the meeting. Another handful were already in jail, on other charges, but will be given the same chance to leave the street life as those who were in attendance. Among the remaining group, officials hope that the message that they've been granted a second chance will be transmitted via friends and family who attended the Tuesday night gathering. Ultimately, none of the offenders needs to avail themselves of the services offered, Fletcher said, but they do need to get away from The Corner.

After the meeting a woman who received the letter notifying her of a pending case against her, approached Fletcher, who oversees policing operations in a large geographic swath of East Austin, giving him a hug and thanking him for the offer of help. As she walked away, he smiled. "I love this job," he said.

*Sarah is not her real name; her name has been changed to protect her privacy.

**The original post said indictments are already in hand for the 31 who received the letter. The cases have not been indicted, but are being held at the ready.