Community and Committee Back Johns Hopkins as Eastside Partner 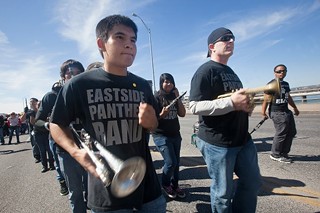 Eastside on parade: The Eastside Memorial High School Band, one part of the campus culture that could be saved if AISD Trustees and Commissioner Michael Williams adopt a community-endorsed plan for Johns Hopkins (Photo by Jana Birchum)

Yet this plan, which the district's evaluation committee notes has "overwhelming community support", still must win over Commissioner of Education Michael Williams and, seemingly, AISD Superintendent Meria Carstarphen

Williams has instructed the district that he requires a new partner at Eastside Memorial to replace IDEA Public Schools and fulfill the campus improvement plan. Without such a partnership in place, the campus could be closed. The consensus quickly emerged that the community wanted a partner entity to act as consultants and support, rather than a charter-style takeover.

Johns Hopkins has won out at both stages of the process so far. On Feb. 23, the district issued an RFP to partner at Eastside. Out of the five respondents, a specially formulated evaluation committee examined the bids of two – Johns Hopkins and the American Institutes for Research. Both went through an initial evaluation, with Johns Hopkins scoring 88.81 and AIR coming in a distant second on 75.45. After that, there was a public meeting on April 20, where both groups made their presentations to the community. According to the district, feedback cards again went the way of Johns Hopkins, and so they have made the recommendation to the administration that the district partner with the university-backed program.

The proposal has been met with great support from pro-education group Pride of the Eastside, whose leadership have asked community members to attend both tonight's board meeting at the AISD Board Room at the Carruth Administration Center (1111 W. Sixth) and a rally tomorrow, Tuesday May 7, at 2pm at Eastside Memorial (1012 Arthur Stiles).

However, there seems to be a fly in the ointment, and it's being placed there by Carstarphen. Out of the 55 schools currently partnering with Johns Hopkins, in the agenda item before the board she and her staff harp on one: Baltimore Talent Development High School. Her staff write, "The Administration is concerned about the fact that the test results for John Hopkins University’s flagship school and longest-running program, the Baltimore Talent Development High School, are still low after supporting the school for over 6 years." She goes on to warn that their scores may not be sufficient to placate Williams.

However, the evaluation committee took Baltimore into account in their deliberations, and still backed Johns Hopkins. In a brief summary document, they praised it as a "comprehensive solution [with a] Strong implementation plan that allows for an immediate start." Even under a list of "Weaknesses/Offsetting Considerations", the committee notes that "the AISD proposal is a different model from to that was provided in Baltimore where they were managing school." Moreover, while the deal with Baltimore Public Schools is in flux, it is a long way from being canceled. And then, of course, there are the 54 other schools that Carstarphen fails to mention.

Her option is a: one that has been rejected by the community and the board of trustees and b: actually does not do anything for Eastside: IDEA Public Schools. Behind the scenes, Carstarphen had been pushing a scheme to turn Allan Elementary back over to IDEA as a K-8 facility. This plan had no takers within the district, but that did not seem to deter her. As recently as the Eastside community meeting on April 20, Carstarphen was still pitching the plan as a viable option in private conversations.

Sources close to the process are becoming increasingly frustrated that Carstarphen seems hell-bent on derailing the process, and that the district, yet again, is paying lip service to the idea of community involvement. The deepest fear is that Williams has been planning to close Eastside and hand it over to a charter group all along, and that Carstarphen is doing her best to provide him with political cover.

The real question now is whether the board tonight will use the evaluation committee members themselves as a resource, or depend on Carstarphen telling them what the committee meant.

For now, the Eastside students may be speaking most eloquently on the issue of keeping their school open, as this video shows.