West, Ammonium Nitrate, And the Myopia of Terrorism 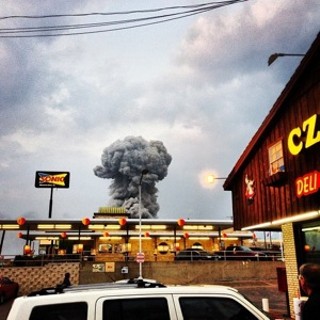 The system worked exactly how it was supposed to: That was the takeaway from Wednesday's meeting of the House Committee on Homeland Security and Public Safety into late month's disaster in West, Texas. Nevertheless, the question was raised: With its emphasis on self-reporting and the threat of terrorism, Texas may be looking the wrong way.

In a two hour, early morning meeting, Chair Joe Pickett, D-El Paso, laid out the agenda: That this was purely a fact-finding session. From the testimony delivered by Texas DPS Director Steven McCraw on Wednesday, it would seem that his office had done exactly what was required of it. But a 20 minute discussion focused on how Texas looks at deadly chemical like ammonium nitrate through the myopic eye of counter-terrorism, rather than the more pressing fear of public health and safety. In the response, not the prevention.

Pickett was aiming for a plain-speaking meeting, one which the survivors and families of West would be able to understand. He sent a clear message to the state officials: The public is watching, so go easy on the jargon. Particularly, he warned, no acronyms.

McCraw noted that "Texas faces the full spectrum of threats," and lectured at length about every possible threat that Texas could face: West Nile Fever, multiple vehicle pile ups, terrorism, before adding that "there is a potential for industrial accidents." However, when it comes to ammonium nitrate, his office's job is to look for "suspicious" purchases, and that day-to-day oversight depends on the locality. It's not just a Texas problem. As McCraw noted, the localization of responsibility began in 1983 with the Superfund Amendment Reauthorization Act. In fact, Texas had been ahead of the pack, as the 1975 Texas Disaster Act meant "Texas had been doing the same thing that the act required in 1986," said McCraw.

It was a similar story from the Department of State Health Services: As representatives of the agency put it, their role is data collection, not regulation. That way, communities can find out what companies are storing what in their neighborhood. However, that information is not exactly easy for the general public to reach: As DSHS Assistant Commissioner Katheryn Perkins explained, the data base is not online.

In a meeting that might have been expected to concentrate solely on industrial accidents, McCraw swirled out to bigger and unrelated issues like hurricanes. "Mother Nature has a vote in terms of when it impacts the state of texas," he added, much to the chagrin of Rep. Dan Flynn, R-Canton. "This was not an act of nature," the lawmaker replied, before pressing with the real question: The role of DPS before the event, and why they hadn't been looking at 270 tons of ammonium nitrate as a danger to the community.

There's a simple reality to what happened in West. Ammonium nitrate is highly explosive. Farmers know it. Manufacturers know it. Health and safety experts know it. Lawmakers and law enforcement know it. Terrorists know it. But, in Texas, the emphasis on tracking its storage and use is placed on the localities. That's a lot of work: According to McCraw's testimony, there are 1,105 firms with ammonium nitrate fertilizer. Within that, 86 are ammonium nitrate only firms, with 96 AN-only facilities statewide. Unsurprisingly, such facilities are concentrated in certain rural communities, and they are generally the ones with fewest resources to mount investigations. More worryingly, there may be communities where local government will be wary of going toe-to-toe with the town's biggest or only large employer.

As for the state's role, it came down to a complex and interlocking system of responsibilities, mostly built around receiving forms and working out what to do in the event of a catastrophe. It now seems it provides an interlocking series of exemptions that, as the Center for Public Integrity notes, creates loophole after loophole. The regulatory structure, such as it is, allows companies like West Chemical and Fertilizer to exploit exemptions. By describing itself as a retailer, rather than a manufacturer, it was covered by far less stringent inspection regulations.

Then again, as Michael King discusses in his column this week, even the strictest regulatory environments are alarmingly lax. Texas authorities are geared up to do little, and the Federal agencies involved - the EPA and OSHA - are so crippled and underfunded that they can do little. Even then, there is mounting evidence that the West factory did not comply with its Federal reporting requirement. According to EPA senior analyst Hugh Kaufman, "They were honest with the state, because they know the state wouldn't do anything."

That DPS – which has little or nothing to do with the health and safety aspects – was the first agency summoned to testify may seem peculiar. In his testimony, McCraw hammered on the issue of terrorism, not public safety. He said, "Until 1995, the only folks who cared about ammonium nitrate were farmers. We didn't recognize until OakBomb that ammonium nitrate and diesel fuel can be a weapon of mass destruction."

"You're referring to the Oklahoma Bombing?" said Flynn, living up to Pickett's promise to stamp out jargon. Unfortunately, he missed McCraw glossing over the history of global terror.

There's no denying that ammonium nitrate devices remain the large-scale explosive of choice for many terrorist groups globally. Mixed with fuel oil, it becomes a cheap, mass-produced explosive called ANFO, and many groups have replicated that process. ANFO bombs were the explosive of choice for decades for the Irish Republican Army against UK citizens, and the Fuerzas Armadas Revolucionarias de Colombia. More recently, on April 18, two explosive devices were set off in Malleswaram, India, and have since been determined to be NH4NO3-based.

Even members of the committee got distracted by the terrorism chatter, with Rep. Ron Simmons, R-Carrollton, talking about "people who want to do us harm" and how "the world has changed since 1985," and worrying about whether localities needed to increase security around similar sites. There was even talk about how West should factor into the budget discussion, that DPS should use it as leverage to get their counter-terrorism research group funding restored (currently, that cash is zeroed out in the House budget. Oddly, there was no similar talk when it came to extra funding for regulatory agencies.)

As staff from the Texas Department of Agriculture argued, ammonium nitrate isn't being kept in big piles just because it looks pretty: It is a valuable fertilizer, used not just for crops but to boost growth of foraging material for the state's grazing cattle. While conceding that it can be dangerous if stored incorrectly, they painted it as an essential part of Texas agriculture. But that safe storage component, especially amidst all the terror talk, was the key priority. The history of the fertilizer as a public safety danger is far greater and far longer than its use in terrorism.

It starts in 1916 with an explosion in Faversham in the United Kingdom, where stores of dynamite and fertilized exploded and killed 120 people. Tragically, Texas has its own history, marked sadly by the 1947 Texas City Disaster. The SS Grandcamp and SS High Flyer both exploded, killing an estimated 581 people, and triggering America's first ever class action lawsuit. More recently, the home of Texas A&M narrowly avoided disaster in 2008 when a fire broke out at the El Dorado Chemical Co. in Bryan.

MSNBC reports that, in February, the West Fertilizer Co. told the Texas Department of Health Service that it had 270 tons of the chemical on-site. However, the LA Times, amongst other outlets, has reported that the company has a less than stellar history when it comes to fulfilling its federal obligations. It has been fined twice in the last five years – once by the Environmental Protection Agency and once by the Pipeline and Hazardous Materials Safety Administration – for a series of violations, including failure to have either a risk management or formal maintenance plan in place. More worryingly, they incorrectly labeled tanks containing ammonium nitrate.

Yet all these problems, all this history of danger just by the presence of ammonium nitrate, and no-one was looking at the site – because it was not acting in a suspicious manner.

McCraw's commentary had one simple talking point. "The over-arching goal of homeland security and public safety is prevention, number one. In the absence of prevention, mitigation." But when it comes to preventing the West disaster, it seems the state was looking the wrong way. 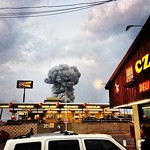