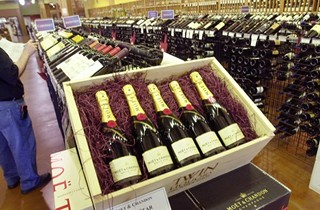 Authorities are still keeping mum about yesterday's raid on Twin Liquors' headquarters. Officials from the FBI, IRS, and TABC spent hours at the Airport Boulevard warehouse, loading several boxes of evidence into a U-Haul truck.

Details are scant about the joint state-federal operation. Several outlets are reporting that officials on the scene implied the investigation was related to money. However, officials have allegedly been advised not to talk to media.

Twin Liquors storefronts remain open and workers at the headquarters were told they could return to work today. The Chronicle has calls out to owner David Jabour and the FBI. We will update the story as details emerge.

UPDATE: David and Margaret Jabour, the President and Executive Vice President of Twin Liquors, have released a statement regarding the raid.

Twin Liquors is family-owned and operated and has been an active part of the Austin community since the late 1800s. We are the third generation to manage this company, which was built upon honesty and integrity.

Although we haven't been told the reason for this investigation, we are cooperating fully with the agencies involved. We are handling this matter with transparency, respect for the agencies and confidence that this will come to an acceptable resolution.

In the meantime, it is business as usual at all Twin Liquors stores. Thank you to our employees, customers, industry and the community for the outpouring of support.