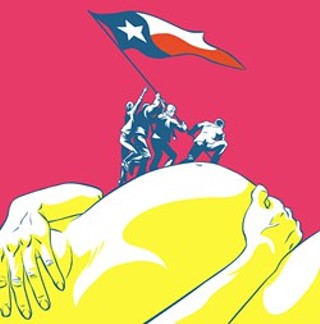 Carole Metcalf and her husband were excited for their visit to the obstetrician: Carol was 20-weeks pregnant and the couple had scheduled an ultrasound, and they would learn the sex of their child. It was a girl, the couple learned – but they learned also that she was sick, terminally ill.

Metcalf was crushed. "Knowing that your daughter is dying is heartbreaking," she told the House State Affairs Committee on April 10, while testifying against a bill that seeks to ban all abortions after 20 weeks.

She had to decide what to do: Induce labor, carry the dying child to term, or abort. She decided to induce labor; she would be able to offer the child, named Amber, a proper burial. That wasn't to be, however, because Seton Hospitals, through which Metcalf and her husband had health insurance, refused to induce so long as the fetus had a heartbeat. Her doctor appealed the decision to the hospital's ethics board; the board refused. Thus, on April 8, 2009, Metcalf "said our goodbyes and [Amber's] heart was stopped."

Having her decisions limited by the hospital was painful, Metcalf noted – and the so-called "fetal pain" bill, House Bill 2364 by Rep. Jodie Laubenberg, R-Parker, would have restricted her options even further, removing her ability to induce an abortion, had Metcalf and her husband, in consultation with a doctor, decided to go that route. The choices she made concerning her child's life weren't respected, Metcalf noted, during her emotional testimony at the tail end of a more than two-hour hearing Wednesday night, and what is worse is thinking that a "very personal, very private, and very painful" choice on how to end her daughter's life would be constricted further. These "decisions are hard enough without the extra limitations," she concluded.

Nonetheless, Laubenberg and a host of witnesses testified in support of the measure (carried in the Senate by Sens. Glenn Hegar, R-Katy, and Donna Campbell, R-New Braunfels) on the presumption that a 20-week fetus can feel pain and that preventing that pain creates a "compelling state interest" allowing the state to limit a woman's access to abortion – even before a fetus is viable outside the womb. The bill "deals with a very sensitive and sometimes emotional issue, the life issue," Laubenberg told the committee. "Scientific evidence suggests pre-born children are able to feel pain," necessitating the ban, which she said would place no undue burden on a woman's reproductive rights. Twenty weeks is "more than enough time to decide whether she will choose to have that abortion."

Proponents of the bill argue that medical evidence supports the bill's proposed ban. (A website called Doctors on Fetal Pain catalogs purported evidence defending this position, though who runs the website isn't clear and an email request for additional information was neither acknowledged nor returned; witnesses in favor of the bill recited talking points that sounded as though they were taken straight from the website.) To the contrary, it isn't at all clear that there is "substantial medical evidence" supporting that position, as Laubenberg's bill claims. In a testy exchange with Houston Dem Rep. Jessica Farrar, Laubenberg exasperatedly assured Farrar that a list of studies she says support the position are each peer reviewed. When asked by Farrar about a 2005 article published in the Journal of the American Medical Association, cited by many opponents of fetal pain proposals as a credible review of the current science, Laubenberg said that she wasn't familiar with the report, and seemed to question whether the JAMA was a reliable source. Does the American Medical Association support abortion rights, she asked Farrar. If it does that might make a difference in whether the JAMA article is credible; some organizations "use editorial license to publish things you want to publish," she said. In the end, Laubenberg said she would "gladly" place "my studies against your studies." (Ironically, in a Youtube video posted by Texas Right to Life in support of the measure, Rep. Greg Bonnen, R-Friendswood, talks about the evidence supporting the idea that fetuses feel pain, while in the background is an imagine of the JAMA article that reaches the opposite conclusion.)

Nevertheless, Laubenberg, Gov. Rick Perry, and other backers of the bill consider the notion that a fetus feels pain at 20 weeks is a foregone conclusion. Certainly a fetus develops sensory receptors early in development; the question remains whether the existence of those receptors means that the fetus can register and feel pain. Research has demonstrated that a fetus will recoil in response to invasive procedures and will release stress hormones, evidence to some, including to several doctors who testified Wednesday, that the fetus is feeling pain. But other research, such as that published in JAMA and elsewhere, reflects that it isn't until well into the third-trimester that nerves are sufficiently developed to actually register pain. A 2010 report by the Royal College of Obstetricians and Gynecologists in the U.K. concluded that prior to 24 weeks, a fetus cannot feel pain.

Paul Liu – a pediatrician from Arizona who said he was asked to testify on the Texas bill by his friend Bonnen – said the fact that doctors will often administer anesthesia to a fetus during operations that take place during pregnancy offers proof that a fetus feels pain. (Liu noted that he is not a surgeon and has not administered anesthesia to fetuses, but said he has heard about these procedures.) While that might be a reason to administer anesthesia prior to an induced abortion in the weeks prior to a fetus' viability outside the womb, it isn't a reason to ban abortions, other witnesses suggested. Witnesses opposed to the bill, including obstetrician Christina Sebestyen, argued that many serious congenital anomalies aren't even detectible prior to 20 weeks, and a ban would eliminate any ability to decide how to proceed in those cases – a view shared by the American College of Obstetricians and Gynecologists, which opposes fetal pain bills filed across the country. Moreover, of the 77,592 abortions performed in Texas in 2010, just 420 occurred after 20 weeks – and witnesses testified that those abortions are typically related to some sort of serious medical issue. (Laubenberg was unimpressed by the statistic that, nationally, just over 1% of all abortions happen after 20 weeks. "One abortion is as many to me as 1,000," she said.)

ACLU of Texas Legal and Policy Director Rebecca Robertson noted that Texas already has a ban on abortions after 28 weeks, a constitutional ban on later-term abortions that protects the life and health of the mother and contains exception for fetal abnormalities. Laubenberg's bill offers no such exceptions – and because it would ban abortion before viability, the measure would likely be found unconstitutional, Robertson said.

Former Oklahoma state Rep. Kevin Calvey, now vice chair of Oklahomans for Life, said he could guarantee that a fetal pain 20-week ban was "absolutely, rock-solid constitutional," and that if it went to the U.S. Supreme Court it was likely that Justice Anthony Kennedy, often a swing vote, would uphold the measure and reject abortion for fetuses that feel pain – i.e.: after 20 weeks. (That was an opinion shared by Austin financial litigation attorney Jason Collins, who suggested pain might be an "objective" criteria on which to determine viability outside the womb.)

Indeed, Calvey and Laubenberg noted, the Oklahoma ban is still in force – but it hasn't yet been challenged; Idaho's ban was struck down by a federal judge in March, a court challenge to Georgia's 20-week ban is pending, as is a similar law in Arizona. In all, 10 states have passed such legislation since 2010.