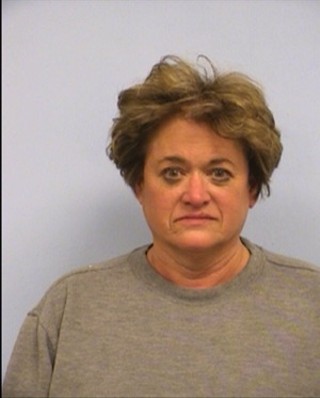 This post is updated, below, to include statements from Lehmberg and Austin Police Chief Art Acevedo, and with a link to a letter from Lehmberg to court officials.

According to the arrest affidavit, a witness called 911 just after 10:45pm to report a four-door Lexus wandering into the bike lane and then into oncoming traffic while traveling southbound on FM 620 near Comanche Trail. The car was being driven by Lehmberg, according to the affidavit.

Lehmberg told the deputy that she'd had two vodka drinks earlier in the evening and that she was on a prescription beta-blocking drug. According to the arrest affidavit, there was an opened bottle of vodka in the passenger area of the vehicle within reach. Lehmberg was subjected to field sobriety testing, including the "walk and turn" and horizontal gaze nystagmus test. Lehmberg did not follow directions well, the deputy reported, and by her actions, he considered that she had "refused" the eye test.

According to the affidavit, Lehmberg was "cooperative" and "polite," but also "disoriented."

Lehmberg was booked into the jail just after 2am.

In a statement, Lehmberg expressed regret over her actions: "I am truly sorry to have let the citizens of Travis County down," she said in a release sent to reporters on Saturday. "I deeply regret my actions and take full responsibility. As I continue to carry out my responsibilities as District Attorney, I hope that the community will forgive my mistake."

In a statement emailed Saturday, Acevedo said that he did not know the details about Lehmberg's arrest because the incident was handled by the Travis County Sheriff's Office and not APD, but was grateful "that no one was injured or killed in this case," he said. "Rosemary is a close friend and colleague, however my stance on DWI is very clear and I was saddened to learn of her arrest," he continued. "Based on my personal knowledge of Ms. Lehmberg's character, I am confident she will handle this matter in an expeditious manner consistent with her many years of dignified service to the people of Travis County."

Indeed, Lehmberg penned a letter to County Attorney David Escamilla, whose office handles misdemeanor cases, and to the county bench, saying that it should serve as her guilty plea. "I enter this unconditional Plea without request for delay, without legal argument by counsel, without any plea bargain, and without any request for leniency or consideration of any type," she wrote. "Further, I agree to appear, without delay, to enter this plea and I accept whatever assessment of jail time is deemed appropriate by the sentencing Court."