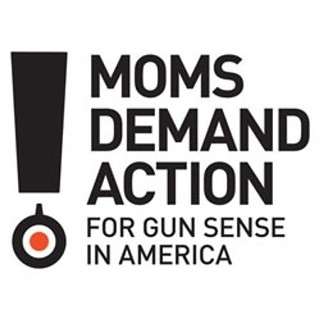 A couple of hundred "Moms Demanding Action!" and their allies met on the South Steps of the Capitol Saturday afternoon, hoping to keep the rational gun control momentum going in the wake of the Newtown massacre.

A range of speakers, from elected officials to personal witnesses of gun violence, spoke to the crowd, most emphasizing that their focus is not on legal gun owners or even guns per se, but primarily at keeping guns out of the hands of criminals or people otherwise not eligible to own guns, especially the mentally ill. Several speakers cited well-known recent incidents like the December massacre of schoolchildren and teachers at Sandy Hook Elementary School in Newtown, Conn., but others noted that the daily gun carnage of relentless gun violence kills 30,000 Americans every year (homicides, suicides, and accidents), including eight children every day.

Speakers included state Rep. Elliott Naishtat and Sen.* Jose Rodriguez, Judy Johnson, who recounted the death of her sister by gun violence in 1972, Austin City Council Member Mike Martinez, who read a proclamation from Mayor Lee Leffingwell declaring this "Texas Gun Sense Day," and exhorting the audience to keep the pressure on in public discussion and at the ballot box. Martinez said he still hopes to ban gun shows on city property -- an effort that has stalled at the city and Travis County after a threat of legal action by state Attorney General Greg Abbott.

A minor disagreement occurred in the audience during Martinez's speech, as a pro-gun demonstrator held a "Stop Gun Ban" sign in front of the speaker's stand and was quickly surrounded by others holding signs such as "Enough is Enough" and "Support Background Checks." Martinez noted the "gun ban" sign wryly and said, "We will make your sign legitimate shortly."

Austin Police Chief Art Acevedo, in full dress uniform, gave a reprise of his dramatic address demanding universal background checks, insisting that support of the Second Amendment requires law-abiding gun owners to support regulations that will keep guns out of the hands of criminals and the mentally ill. Like many of the speakers, he noted that an overwhelming majority of Americans -- 85 to 90% -- support universal background checks. Addressing public officials, he asked, "Who do you represent – law-abiding citizens or criminals who would do us harm?"

Most speakers reiterated that the rally was but one step in a long process, and urged the crowd to keep up the movement. "Stand up to gun violence and demand change," said Naishtat. "More guns do not make us safer," said Rodriguez (D-El Paso), "and sensible gun regulations do not make us less safe. We want only to stanch the bloody river of guns that flood this nation. A rally organizer, Ed Scruggs, read a statement sent by Congressman Lloyd Doggett, telling the crowd, "We've had much talk [about gun regulation], not enough action." Doggett urged the crowd to contact their representatives and "Demand action."

After a moving narrative by Kathy Staats*, an EMT who was serving at Virginia Tech in April of 2007 when a mentally deranged student killed 32 people and wounded 17 others, John Woods –- then a VT student whose girlfriend, Maxine Turner, was among the slain -- also recalled that horrible day. He has used it as an inspiration to continue the fight for gun regulation, particularly to keep guns off campus and for universal background checks. Such a mental health check, he believes, would have prevented the VT shooter, Seung-Hui Cho, from acquiring the weapons he used in the massacre.

"None of the survivors I have spoken to believes there should be guns on campus," said Woods. "We live in a tyranny of guns, and we're asking for gun sense, not nonsense. We will prevail."

*The title of state Sen. Jose Rodriguez has been corrected, as has the spelling of Kathy Staats' name.