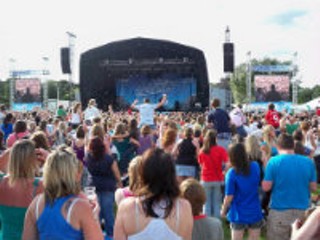 Don't be another face in the crowd

There's no doubt that musical festivals are sexy. The blisters and sunburns, the dirt-caked hair. They attract amour like Pepé le Pew to Penelope. So it's little wonder that users of "travel dating" website MissTravel would pick two Austin mainstays as the best festivals to ignite first date embers. They're used to following a scent.

But how to seal the deal is another matter. The "attractive coeds" who use MissTravel don't seem to have trouble inspiring death-metal-scored snogging sessions, but the rest of us often have to resort to subterfuge. And while one could certainly shell out as one of the site's "generous travelers," foreclosure rarely makes anyone's bucket list. Whether already planning your trip to next year's SXSW (#2 on the list) or planning on working on a sunburn at ACL (#6), the following tips are surefire ways to bring the boys (and girls) to the yard.

1) Disguise yourself as a wristband. When your crush tries to remove you at the end of the night, grasp tightly and say you're never letting go.

3) Make cardboard cutouts of various members of Jay Z's entourage. Attach in layers to your clothing using a staple gun, plumbers caulk, and foam core. Act like you're fighting your body guards to get to your one true fan.

4) Carry a cooler full of popsicles. Everyone loves popsicles.

6) Gather a grackle, a snake, a smudge stick, and an autographed picture of Stevie Nicks. Hail to the guardians of the watchtowers of the West.

7a) Create a music genre by combining any two words from the following list in any order: dub, house, shoe, wave, step, bounce, gaze, dark, sludge, chill, hop, or core.

7c) Immediately disassociate yourself from the genre. All of your prospects will now think you are cool.

8) Culturally re-appropriate Native American religious garb. Loudly explain to passers-by that you're not racist. Wait for another not-racist to defend you.

And if all that doesn't lead to free love, maybe you should redirect your efforts. According to MissTravel's sister site SeekingArrangement, 1 in 6 of its Austin users are still virgins. The thrill of music festivals notwithstanding, clumsy rumpus in a portable toilet isn't most people's choice for their first time. Maybe try spending a little more time in church. Pervert.