APD Infiltrates Occupy: How Many Officers Does it Take to 'Protect' Free Speech? 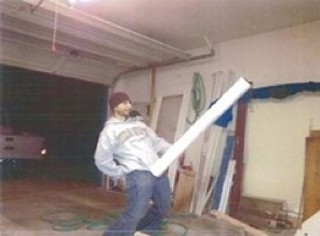 Rick Reza, aka "Rick," shows off his lockbox*

It was the arrest of six members of Occupy Austin during a Houston demonstration in December 2011 that led to the discovery last year that three Austin Police officers had infiltrated the movement. The charges against the protesters have been resolved, but: Were as many as six officers surveilling the actions of local Occupiers?

The Austin protesters were arrested and charged with felony "possession of a criminal instrument" in connection with their use of a so-called "lockbox" – a PVC-fashioned sleeve that allows protesters to link themselves together – during a demonstration in Houston that was part of a nationwide "Occupy the Port" action. As the criminal cases proceeded, the protesters learned that there were three APD officers who had not only infiltrated the group, but who actually built the lockboxes used in the port action. Without the device, which locks protesters together and makes them difficult to separate, the group would have been arrested only on the misdemeanor charge of blocking a roadway, as were other protesters arrested that day.

According to the Austin occupiers, the police – eventually identified as Shannon Dowell (aka "Butch"), Deek Moore (aka "Dirk"), and Rick Reza (aka "Rick") – were the ones that promoted the decision to create and use the sleeve device, entrapping them into committing a felony.

The cases against the Austin protesters resolved in court in Houston Feb. 21 with the dismissal of the felony charges. The group instead pleaded guilty to the misdemeanor charge of blocking the roadway and were spared both fines and jail time, said attorney Greg Gladden, who represented Austin protester Ronnie Garza.

Still a question, however, is how many Austin officers were actually involved in the Occupy Austin infiltration. According to Gladden, documents given to the judge in Garza's case indicated that as many as six officers were actually involved. The names of additional officers were not revealed, however, because the judge ruled that they had played no part in the "manufacture, adaptation, purchase, or delivery" of the lockboxes crafted by Moore, Dowell and Reza, said Gladden. "We still do not know what their role was in this," he said of the other, unnamed officers apparently implicated in documents made available for judicial inspection, but ultimately not turned over to the defense.

APD Chief of Staff David Carter said that the three named officers were the only ones directly involved with the Occupy movement, but that additional officers had been identified by the department as backup should there be some need for them to become involved.

Garza today released a packet of emails among APD and other law enforcement officials regarding Occupy Austin activities that he and Gladden received as part of the discovery in the criminal case. In a lengthy overview of the documents, Garza writes on the Occupy Austin website that it appears at least six undercover officers were among more than two dozen APD officers and supervisors involved in keeping tabs on OA.

Still, Gladden says there is additional information left to discover, including the extent of surveillance of the Occupy protesters by any number of federal agencies. As part of discovery in Garza's case, Gladden subpoenaed records not only from the Austin Regional Intelligence Center – the local so-called "fusion" center – to which Dowell, Moore, and Reza had been assigned, on loan from APD's narcotics division, Gladden said, but also from the state Department of Public Safety's fusion center. Documents provided by DPS were almost entirely redacted, leaving open the question of who was paying attention to Occupy Austin and why.

Gladden says he is considering filing a federal Freedom of Information Act request, and possibly a federal civil rights suit against the APD and others. Police are "supposed to be using the … fusion center to [investigate] domestic terrorism, not to make the world safe from peaceful sit-ins," said Gladden. "I think the [APD] officers' misbehavior was intended to chill [the Occupiers'] First Amendment right of free speech and assembly."

Former APD Assistant Chief Sean Mannix told us last fall that the undercover officers were working inside the movement in order to safeguard the rights of the protesters. Informants inside Occupy had told police that there were certain persons inside the movement who were advocating violence and that having undercover officers inside would help to spoil any potential threats. Moreover, the officers got involved with the building of the lockboxes because they were trying to ensure that the opaque devices would be assembled in such a way that they could be easily removed by police, if necessary, without injuring any of the protesters, Mannix told us.

Nonetheless, Chief Art Acevedo told us in September, the department would conduct a review to see where the mission might have gone astray, to ward against any future incidents. Indeed, Carter said the department has done just that. First of all, he said, officials have concluded that the officers acted in "good faith" and not in an attempt to coerce protesters into breaking any law. And he said that the department will not rule out the possibility of any future "surveillance operations" in "unusual cases like this," but said oversight of any and all such operations would be vigilant and that officers assigned to any such operations would come from the department's Organized Crime Division. Finally, he said, all future surveillance operations of this type will first be vetted by the Fifth Floor – either by the chief or the chief of staff – and that county prosecutors will also be brought into the loop.

*The man in the photo was originally identified as Deek Moore, aka "Dirk." 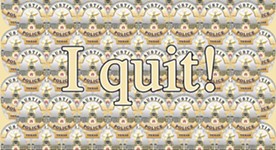