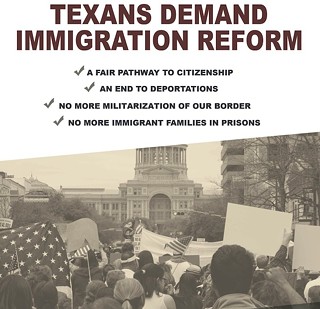 With President Barack Obama giving weekly soundbites and the GOP struggling to look less like The Simpsons' Mr. Burns, immigration reform is again leading the national conversation. Friday's March for Humane Immigration Reform in Austin is ready to seize the moment.

The march comes days after a coalition of social justice groups, including the ACLU of Texas, the Austin Immigrant Rights Coalition, and the Texas Civil Rights Project delivered a letter to the Senate Judiciary Committee and the Texas Congressional delegation that called for an end to criminalized migration. Especially at issue is the Bush-era holdover Operation Streamline, a zero tolerance policy that orders federal charges for those who illegally cross the border.

Friday's rally will have special emphasis on the infrastructure surrounding deportation, calling for the end of militarized borders and immigrant imprisonment. Although many political figures are paying lip service to the idea of immigration reform, the demands may be a hard sell. Faced with changing demographics and the GOP Hispanic burn in the November election, Texas Republicans are largely ignoring the issue altogether, as suggested by Rick Perry deciding not to touch on the "emergency" of sanctuary cities at the start of the 83rd legislature.

Political cowardice aside, the silent treatment might have some benefits. With each display of immigration bombast, newbie Texas Sen. Ted Cruz seems to be getting increasingly older. He's just a few weeks away from a complete transformation to Pat Buchanan. Shudder.

The March for Humane Immigration Reform begins at Republic Square Park, 4th and Guadalupe, at 11:00AM Friday. A rally will follow 12:30PM at the Texas Capitol steps.