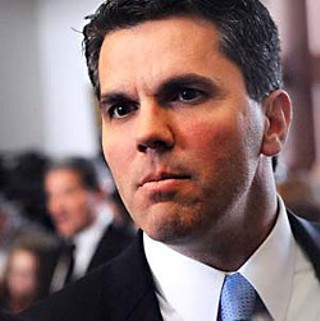 "This will be my last session as a member of the Texas House." With these words, Rep. Mark Strama, D-Austin, began the countdown to his exit from the Legislature, and triggered the inevitable firestorm of speculation that he will run for mayor of Austin.

Strama made the announcement on his newly-launched blog www.insidetherailtexas.com yesterday, Jan. 20. It wasn't exactly a surprise: Strama has clearly been burned out on the House for a while, and when Speaker Joe Straus gave his 'green collar jobs' committee chair to turncoat Republican Aaron Peña, he showed remarkable fortitude in sticking around at all. That given, he wrote, "The norm around here is that you don’t announce that you’re not coming back too early, because lame-duck status can reduce your effectiveness."

However, he and wife Crystal Cotti had decided before the session that his fifth would be his last, and he made the announcement early. Still, it's clear he will miss life under the Dome a bit. He wrote, "If the Texas House didn’t exist for the purpose of democratic self-government, it would need to exist for the purpose of sociological research into what happens when you assemble the most diverse cast of characters imaginable, place them in a small chamber every day for long hours over a five month period, and force them to talk about all the things your grandmother taught you not to talk about in polite company – politics, religion, even sex. All in the context of a reality TV environment in which each action everyone takes has the potential to get them voted off the island. "

So what next? There's years worth of scuttlebutt that Strama is contemplating a run for City Hall's top job. There was some speculation he might run in 2012, but he made it very clear he would not run against incumbent Mayor Lee Leffingwell. Even before this announcement, his name was back on the "maybe" list, and he had upgraded himself from rumored to "considering" ("considering means considering," he recently told Chronicle reporter Mike Kanin). Strama conceded in his missive that this would fire up the rumortron. He wrote, "I know you’re all assuming this means I’m running for mayor of Austin. It doesn’t. I still haven’t decided, and don’t intend to decide until after session is over." He even raised the possibility of heading back into the private sector, either in renewable energy or educational technology (he already owns a local Sylvan Learning Centers franchise).

[UPDATE: His blog says "considering" but his press releases imply more. Early this morning there was a statement from Strama saying that he would be joining staff from Rep. Lloyd Doggett's office and Education Austin President Ken Zarifis at a press conference calling on Congress to avoid the sequester. Just stretching his arms on the way out, or reaching out to some potentially useful allies?]

If Strama did run for mayor, it would be a sign of a potentially significant shift in Austin politics. After all, who gives up a sinecure like a comfortable (if low-paid) State Rep gig for the weekly grind of City Council? It used to be the other way round, that someone like Kirk Watson would bounce off that stepping stone into the Capitol. But with Austin now a major city, then it could be a step up for Strama. Moreover, a few years on Second Street could position him nicely for a statewide run in, say, 2018 or 2022. Much better than twiddling his thumbs as a back-bencher, waiting for the House to swing to the Dems.

A Strama candidacy would be nothing to sneeze at, especially since he would be running under the new 10-1 single member district system (increasing the status of the mayor), and in a November election, rather than the traditional Council May date. November means higher turn-out, and a lot of Dem activists beating the fields. SMDs are also predicted to mean higher turnouts in traditionally low participation areas.

As for Strama himself, he is not as seasoned in city politics as some potential rivals (not least Mayor Pro Tem Cheryl Cole, and Council members Mike Martinez and Laura Morrison). However, that also means he is not weighed down with city baggage. Moreover, he started burnishing his local credentials this session by joining the low-profile but highly relevant House Ways & Means Committee, as well as International Trade & Intergovernmental Affairs. Worst of all for anyone that he goes up against, he has spent a decade constructing a fearsome campaign engine in the form of the Mark Strama Campaign Academy.

His statement heats up the mayoral race, but it also raises a fascinating question: Who will consider running to replace him in the House? There's a long chain of ambitious Dems who have waited patiently for some of the old guard to die, quit, lose or otherwise make space (or, as Strama writes, "There are a bunch of really talented folks interested in running to replace me, and I want them to be able to start introducing themselves to voters without having to tap dance around me"). Already Democrat and owner of San Antonio-based civil contractors Gideon Construction Jade Chang Sheppard is reported to be considering a run to replace Strama.

Chang might have to update her address: Her 2012 Federal Election Committee filings have her listed as living in San Antonio. Will she be the only one moving into the district? Doubtful. Let's see who else starts shopping for a new home in Pflugerville, shall we?

[UPDATE 2: Israel sent out a press statement this morning saying that she has filed her treasurer papers with the Texas Ethics Committee. A noted Democratic and LGBT advocate, Israel is probably most familiar recently for serving as campaign treasurer for Martinez. Prior to that, she was the legislative director for the Texas Association of Mexican-American Chambers of Commerce and made an abortive attempt to dislodge Ron Davis from the County Commissioners Court in 2004.]

[Update 3: Add a third name to that list. Associate Municipal Court Judge and Public Safety Commissioner Ramey Ko is reportedly considering the idea as well. Aside from being a long-time Democratic activist, Ko has been at the forefront of trying to organize the unexpressed political potential of Austin's Asian community. He also famously, if politely, castigated Rep. Betty Brown, R-Terrell, when she proposed in committee that Asian migrants might change their name to something er, 'regular folks' can pronounce.