The well-traveled political consultant William "Peck" Young – in his heyday, his clients ranged from Ann Richards to Michael Dukakis, and "all the mayors of Austin from 1975 to 1997" (official bio) – is the founding Director of the Center for Public Policy and Political Studies at Austin Community College.

More recently, Young is best known for helping lead the successful Austinites for Geographic Representation campaign for the new 10-1 City Council districting system, and the Independent Citizens Redistricting Commission that came with it. In that capacity, he was recently interviewed by Elizabeth Pagano for the Chronicle, for a story we published Feb. 1, "The Road to 10-1," by Pagano and Mike Kanin.

The story was primarily about the ICRC process – its structure, development, and calendar – and Young was asked both about the substance of the districting plan and the commission process to get there. In his answers (quoted at length in the story), he defended the plan and denounced any arguments against it as "asinine," "racist, "classist," "narrow-minded," and "stupid." More specifically, he accused the current City Council and the City Attorney's Office of being obstructionist and "fighting to the last goddam bullet" to undermine implementation. He ended that rant with a flourish: "They have shown all the decency and all of the democratic leadership of a bunch of Soviet commissars." (A bit of context: Young was angered by a recent Council decision to reimburse commissioners according to standard city employee practices, rather than for mileage and child care, as preferred by AGR.)

In light of Young's specific charges against the Council, in due course the reporters asked Members if they had any response. (For the record, all the Council members supported districting, although some preferred the hybrid plan that won a smaller election majority than 10-1.) In response to Kanin's email query, most of the Members declined to respond directly to Young's more inflammatory charges, but defended the city's processes and decisions.

Meanwhile, prior to publication, somehow Young learned of Kanin's inquiries and began passing the word at City Hall that he was about to be misquoted, and that he never talked to Kanin (indeed, he talked to co-author Pagano). From a mayoral aide, Young managed to get a copy of Kanin's email, which quoted verbatim the passages I've summarized above, including the crack about "Soviet commissars."

In full damage control, Young wrote back to the aide: "This is nuts. I was mad but I never lost my mind."

That brief correspondence, including Kanin's quotations of Young, is posted here. In addition to this email, we heard from more than one source that Young was telling people at City Hall that we misquoted or misrepresented what he said – or indeed, that we'd even altered the recording of his interview (which we wouldn't know how to do even if we wanted to). So this week I called Young to ask whether that was true, and if he wanted to request any corrections.

The following is a complete transcript of my conversation with Young:

Peck Young: This is Peck.

Michael King: Hello Peck, this is Michael King over at the Chronicle.

PY: Oh hi Michael, what can I do for you?

MK: Well, I'm checking in, because I understand you've been telling people you were misquoted …

PY: Michael, I'm not going to talk to you guys anymore, period, so there's no reason for you and I to pursue this. Click.

So apparently, Young likes to insult people behind their backs but doesn't care to be called on it. It's not even the first time he's pulled this stunt on the Chronicle. In May of 2011, I covered a lightly attended districting meeting at the Carver Library sponsored by the Austin Center for Peace and Justice. Somebody suggested city demographer Ryan Robinson as a potential mapping expert, and Young immediately and without explanation denounced Robinson as untrustworthy. Robinson read the post, called Young (whom he admired), and asked him why he would say that – and Young denied ever having said anything of the kind.

A real stand-up guy. After our truncated phone call, I wrote to Young with an open invitation to respond, should he change his mind. Meanwhile, readers can listen to the unaltered recording in full below, and draw their own conclusions.

Was he nuts, or just lost his mind? Your call.

Young and AGR (and the Council-appointed Citizens Redistricting Committee, and the City Council) are to be applauded for their parts in finally persuading Austinites to approve Council districting, a change long past due. (For the record, the Chronicle endorsed districting all seven times it was on the ballot.) But it's really past time Young & Company got off their condescending high-horses in response to anybody who disagrees with them, in any way, about the details of the plan or the process.

And if Young wants to express his sometimes colorful, contrarian, often aggressive opinions, we'll be glad to quote them when they're newsworthy. But when he decides (after the fact) he's put his foot in it, he shouldn't call us liars for quoting him accurately. 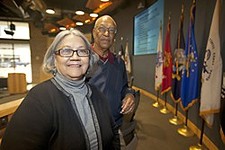