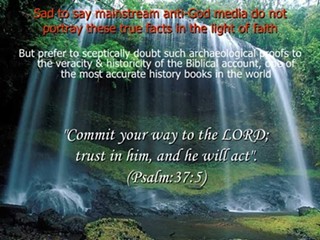 In the Permian High School class on Bible History and Literature, students watch a slide show that includes a frame depicting a lush green landscape behind a cascading waterfall.

Imposed over it is this text: "Sad to say mainstream anti-God media do not portray these true facts in the light of faith But prefer to sceptically [sic] doubt such archaeological proofs of the veracity & historicity of the Biblical account one of the most accurate history books in the world."

Indeed, the slide, part of a lesson that teaches public school children in the Ector County ISD that the Bible's miracle stories – in this specific case, Moses crossing the Red Sea – have been proven through archaeology, is among a host of examples of academically problematic lessons taught to secondary students in 57 public school districts and three charter school districts in Texas.

Although the Texas Legislature in 2007 passed a law requiring school districts to teach the influence of the Bible on history and literature, just 60 districts have used that to create special electives on the Bible. Indeed, before the bill was passed there were 25 Bible courses already offered and a 2006 report by the Texas Freedom Network Education Fund detailed "serious academic and constitutional problems" with most of them. In passing the 2007 bill lawmakers put in measures designed to address some of those problems. Now, some five years later, the problems persist, according to a second report – Reading, Writing & Religion II: Texas Public School Bible Courses in 2011-12 – conducted by Mark Chancey, a professor of religious studies at Southern Methodist University in Dallas for the Texas Freedom Network Education Fund.

According to the new report, most of the districts with Bible-specific courses failed to train educators to teach the course, as required by the law, and the State Board of Education has failed to adopt content-specific curriculum standards for the Bible classes, also required by law. Combined, the lack of training and guidance mean that many of the classes lack academic rigor, are biased in content, and treat the Bible as a history text, among other problems. In short, many of the districts now offering the classes are not only out of compliance with state law, but may also be running afoul of constitutional protections. Indeed, as a power point created for Harris County's Klein ISD explains to students: "The Bible is united in content because there is no contradictions in the writing [sic]. The reason for this is because the Bible is written under God's direction and inspiration." Another of the slides drives home the point: "The Bible is the written word of God."

Chancey's report is based on information obtained from school districts under the Texas open records law, including a request for copies of instructional materials and records related to teacher training. "As a biblical scholar and especially as a parent, I want our state's public schools to take the study of the Bible's influence as seriously as they do the study of science or history," Chancey said in a press release. "But the evidence shows that Texas isn't giving the study of the Bible the respect it deserves. Academically, many of these classes lack rigor and substance, and some seem less interested in cultivating religious literacy than in promoting religious belief. Their approach puts their school districts in legal jeopardy and their taxpayers in financial jeopardy."