A 'Third Way' for Pot-Law Reform? 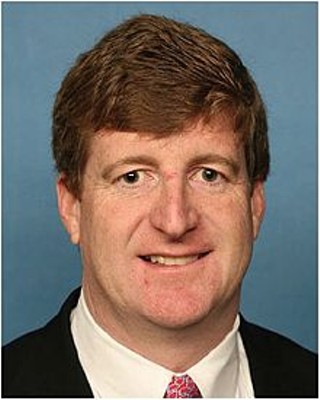 A majority of voters in Washington and Colorado have decided that the legalization, regulation, and taxation of pot for recreational use is a better alternative to pot prohibition, but a new group, led by former U.S. Rep. Patrick Kennedy, argues that neither the drug war, nor legalization, are healthy answers to the nation's drug issues.

Kennedy – who has admitted in the past to abusing cocaine, prescription drugs, and alcohol – has launched the bipartisan Smart Approaches to Marijuana as a "third way" of addressing marijuana use, an approach that "neither legalizes, nor demonizes, marijuana," according to the group's webiste. That third way, according to SAM, is to approach pot policy from a "health-first" perspective that is "based on reputable science and sound principles of public health and safety."

Despite that assurance, SAM so far has done little to suggest its advocacy is centered in solid science: a quote from Kennedy on the website links pot use to mental illness, while other sections of the site argue that pot leads to lower IQs, that research shows that pot is highly addictive, and that "people arrested for marijuana possession" rarely wind up behind bars.

Indeed, one SAM proposal, that pot users be cited, but not jailed, and instead required to submit to mandatory health screenings and to a "marijuana-education program" – and then to rehab, should the pot-educator feel that's necessary – prompted a swift and stern response from drug-law reformers. "The proposal is on par with forcing every alcohol user into treatment at their own cost, or at a cost to the state," Mason Tvert, communications director for the Marijuana Policy Project said in a press statement released last week, in advance of Kennedy's SAM project launch in Denver.

Tvert argues that Kennedy's proposal for the re-education of pot users is the "definition of hypocrisy," coming from a man whose family made a fortune selling booze, which pot-law reformers argue is a far more destructive drug than is pot for recreational use. "If this group truly cares about public health, it should be providing the public with facts regarding the relative harms of marijuana and discouraging the use of the more harmful product," Tvert argues.

As such, MPP has launched an online petition, calling on Kennedy to step back and get real: "Please drop out of Smart Approaches to Marijuana or explain why you are working to keep a less harmful alternative to alcohol illegal," reads the petition.

You can find the petition, and sign it, here.