How the coup to remove the Texas House Speaker strengthened him 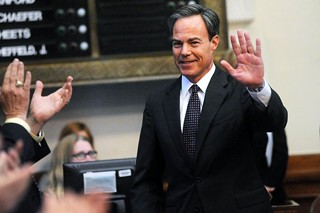 How you like me now? Speaker Joe Straus returns for a third session (Photo by John Anderson)

The Tea Party has a new hobby: Abortive attempts to remove House Speakers they don't like. First it was John Boehner up in DC, now it's Texas' own Joe Straus.

The plot to remove Boehner was spectacularly inept. Scratch that. It was Keystone Kops bad. Joshua Green over at Bloomberg Businessweek chronicled the cavalcade of disasters. Politico highlighted how clueless the coup was, when one of their photographers snapped the list of conspirators. Why? Because Kansas GOPer Rep. Tim Huelskamp didn't know how to hide his iPad.

And now it's a similar scene with the Texas plot to remove Straus. It's no secret that the Tea Party hates him. Why, that's a little less clear. In their weird parrallel cosmos, the speaker that oversaw swinging budget cuts, a merciless gerrymander, a potentially unconstitutional voter ID bill, and fast passage of anti-woman legislation is some form of screaming liberal. Yeah, wrap your head around that.

The Tea Party and, more importantly, its think tank string pullers and pay masters, spent the entire primary season trying to wreck Straus. They couldn't remove him, but they constructed a list of his 'lieutenants', like Education Chair Rob Eissler, R-The Woodlands, and Mike 'Tuffy' Hamilton, R-Mauriceville. When they lost, groups like Texans for Lawsuit Reform and Young Conservatives of Texas crowed their victory from the roof tops.

But it wouldn't mean jack unless they could get Straus out as speaker.

Here's one piece of praise: At least, unlike their congressional counterparts, they had a consensus challenger. In fact, they had two. First it was Bryan Hughes, R-Mineola, who never really came across as the world's most convincing super-conservative. However, realizing that he had no traction, he bailed in favor of Rep. David Simpson, R-Longview.

A sophomore who spent his first session protecting puppy mills and railing against the TSA, he seemingly had even less support within the House rails than the more seasoned Hughes. Yeah, no matter how much groups outside the Capitol kick and moan, the choice of speaker comes down to the 150 members on the floor.

And even before they spoke, it was clear that Simpson was done. Rumors floated around the day before Tuesday's gavelling in that he was going to pull out. And when he finally asked for a personal privilege moment before the speaker vote, his exit was sealed.

It was a withdrawal speech that was met with bafflement. Everyone but the most blinkered loyalists knew that his crusade was at an end, so his exit was no surprise. What was shocking was how incoherent it really was.

After mangling both the name of author GK Chesterton (it's not GK Kesterton) and one of his most famous quotes ("I believe in getting into hot water; It keeps you clean."), Simpson rambled on that "reforms are needed when an institution becomes encumbered and unnecessarily by practices that hinder its operations." Repeat "liberty", "Go along to get along", and "free government" ad nauseam, as he talked about "intimidation, payback, an uneven or outcome-based application of the rules." He was withdrawing, he said, because of "fear of retribution," and he was only going because his friends told him he couldn't win.

Oh, and when he talked about "the protection of minority rights," jaws hit floors. Yes, you guessed it, by minority he meant him and his marginal Tea Party buddies.

So what was this all about? One veteran lawmaker suggested that it's that Simpson is just clueless about how the place works. Just because, say, House Administration Chair Charlie Geren, R-River Oaks, can be terse, that doesn't mean he's vindictive. It just means he's got shit to do. Moreover, if Simpson and co think Straus is mean, they should have been there when 'Smiling' Tom Craddick was running the place with an iron fist.

Here's the reality. Straus is basically a mirror of the House. When it was split Republican-Democrat 76-74 in 2009, he ran it down the middle, with chairships and committee appointments reflecting the knife edge. In 2011, when the Tea Party revolution was high, and defectors like Allan Ritter and Aaron "see ya" Pena left the Democrats with only 49 seats, he let the place vault to the ultra-right.

So what happens now, with 55 Democrats? It's not like there's been a liberal revolution. Yet Straus knows that, if Simpson or Hughes had really pushed the point, he would have depended on those 55 Dems to keep the speakership. He'll also really depend on their expertise: After all, with 43 freshmen (gulp), he's got a very, very thin bench of veterans to make the place run smoothly.

At the same time, Democrats (several of whom actually seconded his nomination yesterday) know full well that Straus is no liberal. There is ultimately a big gap between fairness and partisanship, and Straus remains a Republican speaker with a big Republican majority. He may have talked up public education investment yesterday in his opening words, but he has made no definitive commitment to restoring the school funding he helped devastate last session.

This all leaves Straus in a fascinating position. When Gov. Rick Perry spoke on Tuesday, he looked tired and distracted, and his talking points mostly got polite applause. Lt. Gov. David Dewhurst owes the Tea party no favors, since they sent Ted Cruz to the US Senate in his place. In fact, he and Straus probably have a lot to bond over, since Freedomworks hates them both. However, unlike Dewhurst, Straus is at least passably popular in his own chamber.

Dewhurst is even talking the heresy of accessing the Rainy Day Fund, to pay for water projects. That's also part of Straus' agenda, along with transport and education. They're big, complex issues, but they're also things that a lot of people can agree upon. Could it possibly be that the Tea Party's nemesis has the strongest whip hand of the big three this session?