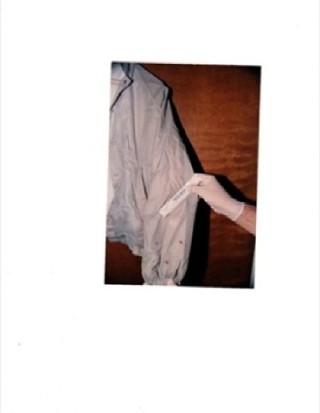 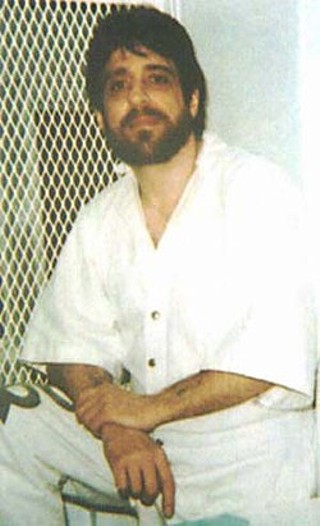 This jacket, blood- and sweat-stained, was found near Twila's body. It's now missing.

DNA testing in the case of death row inmate Hank Skinner "confirms" that he is responsible for the deaths of his longtime girlfriend, Twila Busby, and her two grown sons, Elwin Caler and Randy Busby, who were murdered in the home they shared in Pampa on New Year's Eve 1993, lawyers for the state assert in papers filed in Gray County court on Tuesday.

According to the "advisory" filed in court regarding the results of post-conviction DNA testing done this fall, Skinner's DNA was found on 10 items of evidence among 40 submitted for testing by the Department of Public Safety's Lubbock Crime Lab, including on multiple items of evidence taken from the bedroom shared by Twila Busby's sons, where they were both murdered. Skinner's DNA was found in blood on a dresser, on the door frame, on a comforter, on a tennis shoe, and on a cassette tape holder all collected from the room. Skinner's DNA was also found on door knobs – both inside and outside the house – and on the back door of the house. The test results show that Skinner was all over the house the night that the family was murdered and, combined with testing done prior to Skinner's 1995 trial, proves he is responsible for the murders, Assistant Attorney General Edward Marshall wrote for the court.

Skinner has long claimed he is innocent; he admits being in the home the night the family was slaughtered, but says he was knocked out by a cocktail of booze and prescription drugs and awoke to find the carnage. He has argued that testing on a slew of items, never previously tested – including vaginal swabs taken from Twila, clippings of her nails, two knives found at the home, and a blood- and sweat-stained windbreaker found near Twila's body – could prove someone else was in the house.

For more than a decade, the state has fought against allowing post-conviction testing for Skinner; this summer, a lawyer for the state argued before the Court of Criminal Appeals that to allow testing after all these years would be to incentivize defendants charged with capital crimes to forgo testing at trial in order to request it at a later date as a tactic to stall execution. That argument didn't appear to impress the CCA, and before the court issued a ruling, the state withdrew its objection to the testing, agreeing with Skinner attorney Rob Owen to a list of items submitted to the DPS' Lubbock lab. Notably, no male DNA was found on the vaginal swabs, nor was there any foreign DNA found on the fingernail clippings. Seven hairs found clutched in Twila's hand were matched to her DNA; no DNA was obtained from 10 other hairs.

In a statement released Wednesday, Owen criticized the state for jumping to conclusions about the DNA results obtained thus far. Owen noted that testing is still ongoing – including on two items where a mixture of DNA, including that of an unknown person, has been found. While no DNA was found on one of the knives collected from the house, a mixture of DNA, including Skinner's and Caler's, was found on a knife collected from the front porch of the house, along with a DNA profile from an unknown person. Similarly, a mixture of DNA including an unknown profile was found on a blood sample of carpet collected from the sons' bedroom. "We will remain unable to draw any strong conclusions about whether the DNA testing has resolved the stubborn questions about Hank Skinner's guilt or innocence until additional DNA testing has been completed, and the data underlying that DNA testing has been made available to our experts for a detailed review," Owen said. Additional testing is needed to amplify the unknown DNA profile so that it can be loaded into the national law enforcement database to search for a match, Owen said. The profile has been run through Texas' DNA database but didn't generate a hit. Details about the discovery of the unknown profile were not included in the AG's office court advisory.

And still outstanding is the question of the snap-front jacket: Shortly after the state agreed to testing, it was revealed that the state has lost the jacket. No one with the Pampa Police Department or the Gray County Sheriff's Office has seen the jacket in years, and it is unclear if anyone is actively searching for it. The jacket is key to Skinner's case, Owen said this summer, because it looks like a jacket that was regularly worn by Twila's uncle Robert Donnell, who had been seen stalking her at a party shortly before she was murdered. The AG's office has not responded to questions about the missing jacket.