The anti-Prop. 1 folks are a motley crew

It's a hoary cliché that politics makes strange bedfellows, but this election may set records – beginning with the odd coalition lined up against the Central Health Proposition 1. The opposition ranges from reflexive anti-taxers like Don "Tea Party" Zimmerman to St. David's Healthcare (and its equity partner, hospital chain HCA).

And then it gets really weird.

Smaller groups of opponents include folks who want to hold the deal hostage unless UT-Austin (kicking in major funds to run the medical school and teaching hospital) agrees to save the Lions Municipal Golf Course from commercial development, and others who say Seton Healthcare (sponsoring the project) can't be trusted to provide reproductive services.

Those folks need to meet Texas Alliance for Life. Among its statewide endorsements – almost exclusively "pro-life" Republicans – the TAL lists exactly one proposition that it's asking voters to oppose: the Central Health tax ratification. As usual, "pro-life" stops at the womb – once you're born, when it comes to health care, you're on your own.

For the record, this isn't the first time St. David's has weighed in on public health care and found the whole notion distasteful, preferring to rely on "tort reform" to bring down medical costs. In 2009, they were promoting Congressman Lamar Smith's latest pyrrhic effort at "national tort reform," seemingly unaware of its failure to address either rising costs or broader healthcare services in Texas, and thoroughly uninterested in any national health care proposals.

If the local headlines and useless TV coverage has left you wondering who does support Prop. 1, check it out here. The groups range from the Real Estate Council of Austin through the local Chambers of Commerce and the Central Labor Council (not normally bosom buddies), and oh yes, Planned Parenthood and One Voice Central Texas and the Community Action Network and many more – because they all realize a relatively small investment of local property taxes will establish a major new public institution, carrying many jobs and economic development, and simultaneously draw down a 146% match from Medicaid to transform the delivery of local health care to the folks most in need of it (and who we already pick up the tab for at local emergency rooms).

Call it a win-win. 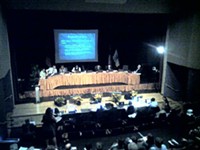