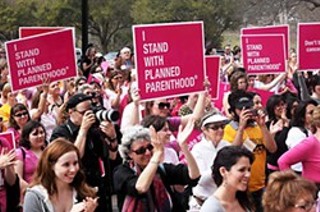 Planned Parenthood supporters rally at the Capitol in March 2011

A day after a federal appeals court refused to reconsider its prior ruling, allowing the state to ban Planned Parenthood from participation in the Texas Women's Health Program, a state judge has entered a temporary restraining order, blocking – for now – TWHP implementation until the court can consider whether the ban violates state law.

At issue is whether the state can redefine the program in order to cut Planned Parenthood out, beginning Nov. 1. The TRO, issued by Travis County District Judge Amy Clark Meachum, puts the brakes on that plan until after a Nov. 8 hearing on whether the state has the ability to eject the nonprofit women's health provider from continuing to serve nearly 50,000 low-income and uninsured women already enrolled in the successful program.

In its new suit, Planned Parenthood argues that the new rule that would keep it from participation is not authorized by the Texas Human Resources Code, which establishes the WHP subject to federal approval. Until the state changed course last year taking steps to exclude Planned Parenthood, the WHP operated as a Medicaid-waiver program, 90% funded with federal money. When the state decided to ban Planned Parenthood – because some of clinics, though not those involved in the WHP, provide abortion care – the federal government balked, saying that the exclusion of a qualified Medicaid provider violates federal law. The government has declined to renew the waiver so long as the state insists that Planned Parenthood be excluded. According to the new lawsuit, the HRC contains a clause that would render "inoperable" any provision that would cause the state to lose federal funding for the program. State lawmakers did not authorize the Health and Human Services Commission to take steps that would cause the state to lose that funding, the clinics argue.

Reportedly, the state plans to move forward with it's plans despite the TRO. "Texas will keep fighting to protect innocent life," Gov. Rick Perry wrote in a Friday post on Twitter. The Travis County court ruling "ignores the will" of lawmakers and the people of Texas.