Greg Abbott Versus the Black Helicopters 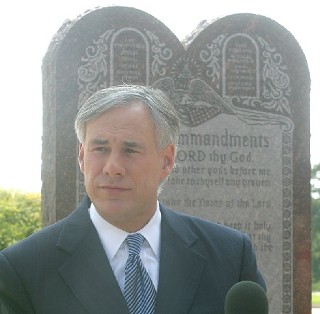 Watch out for black helicopters at your polling places! This week Attorney General Greg Abbott played a card straight out of the conspiracy theory deck by raising a ruckus about overseas elections observers being in Texas.

Here's what's happening. The Organization for Security and Co-Operation in Europe, as it has for years, will be studying the US elections. A group of 13 international experts and 44 long term observers from 23 OSCE nations, representing the Office for Democratic Institutions and Human Rights, and lead by Ambassador Daan Everts, will be assessing the conduct of elections across the US, including Texas. This is all legal, above board, and will be used to create a non-binding report on election practices. As the OSCE noted in its Oct. 9 press release, "The mission will analyze the legislative framework and its implementation and will follow campaign activities, the work of the election administration and relevant government bodies, including voter registration, and the resolution of election disputes. As part of its observation, the ODIHR mission will conduct comprehensive monitoring of the media."

Enter Abbott, who on Tuesday released a firebreathing memo to Everts that "groups and individuals from outside the United States are not allowed to influence or interfere with the election process in Texas." With an oddly pointed warning, he added that "it may be a criminal offense for OSCE’s representatives to maintain a presence within 100 feet of a polling place’s entrance. Failure to comply with these requirements could subject the OSCE’s representatives to criminal prosecution for violating state law."

Other people who have complained about OSCE analysis of their elections? President Alexander Lukashenko of Belarus, and the Russian Foreign Ministry. Not great company.

The OSCE has already fired back at Abbott. ODIHR director Ambassador Janez Lenarčič said that Abbott's "threat of criminal sanctions against OSCE ODIHR observers is unacceptable.” He tersely noted that "these are the sixth United States elections the Office has observed, without incident, since 2002."

Abbott's Tweets and press release have raised the fictional specter of blue helmeted UN forces standing over ballot boxes. The reality is that, in addition to the OSCE experts, there will be around 100 elected representatives from around Europe and Asia on a fact finding mission for the OSCE Parliamentary Assembly. In a separate statement, Special Co-ordinator and Portuguese Member of Parliament Joao Soares wrote, "We are not coming to judge a result but to report about the process. In a country so well known for its diverse citizenry, we will observe how inclusive the election process is in line with the country's own laws and international election commitments."

The OSCE was founded in 1973 as a human rights body, taking a broad view of the underlying causes of global instability. It works towards conflict prevention and takes a 'friendly advice' approach to assisting states. The US has been a member of the OSCE since 1990, and has regularly sent Americans to assess election practices in foreign nations. It was actually the Bush administration that invited the body to observe American elections, and it has served in a purely advisory role, issuing reports on process and issue. In 2004, U.S. Commission on Security and Cooperation in Europe chair Rep. Chris Smith, R-New Jersey, told the Washington Times" "I welcome them.… We have nothing to hide, and if we have a flaw, we want to fix it."

In a statement this morning, ACLU executive director Terri Burke wrote, "Given the ongoing discrimination in voting federal courts have recently found in Texas – its adoption of racially biased redistricting plans and a photo ID requirement for voting – I’m not surprised that some state officials don’t want an independent organization to take a look at our elections."

One elections expert told us, speaking off the record, "If Abbott was serious about voter fraud, the OSCE is exactly who he would want to have on board."

That Abbott decided to make a big deal of a non-event is baffling enough: That he turned the letter into a press release is even more surprising. And then he decided to argue that his stand is actually a strike against the United Nations.

Which is odd, because the OSCE is not part of the United Nations (so much so that, when the Bosnian leadership refused to deal with the UN in the mid-1990s, they were prepared to work with OSCE instead.) The right has spent all morning rambling that OSCE is a UN ad hoc organization, which basically means it is recognized by the UN, but has no power, no authority, and cannot even speak to it. Other such observer organizations include the Red Cross, the Council of Europe, and the Global Fund to Fight AIDS, Tuberculosis and Malaria.

We called Abbott's office about this, and asked why he was conflating the OSCE and the UN? In a brief conversation, his communications staff told us "we didn't say they were the same thing."

Abbott's office also suggested that we check the Secretary of State's office for her position on who may or may not act as an election monitor. Actually, what Hope Andrade's letter points out is that Texas and the OSCE has had "a long and productive relationship," but that she worries about media reports that it has been politicized. However, this isn't a copy of Abbott's letter. Instead, she pointedly adds that "it is critical that Texans understand that the OSCE, which has no jurisdiction over Texas elections, is not in Texas to do anything other then learn about our well-established election processes." Moreover, state director of elections Keith Ingram told the Texas Tribune that he had already run them through the state laws and they understood the restrictions.

Who has done the politicizing? Abbott would argue that it's (wait for it) ACORN. Because, you know, once a meme is rattling around in the right wing collective brain, it's very hard to shake it out. He suggests that this is all a sinister conspiracy mounted by Project Vote, which he said "is closely affiliated with ACORN." He ignores that it's also worked with the NYU School of Law.

But why would Abbott go off half-cocked, yelling about the UN? Doesn't this all sound a little bit like a dog whistle to Alex Jones listeners, the kind looking for black helicopters and sending us letters on a seemingly daily basis about UN Agenda 21. What's Agenda 21? It's the body's non-binding agreement on sustainable development: But the far right's finest minds have decided that it's a secret blueprint for a UN takeover of America. Oh, and Soylent Green is people. Why blow something that looks that much like a dog whistle that only the crazies will hear?

The answer from Abbott's office? "We'll get back to you on that."