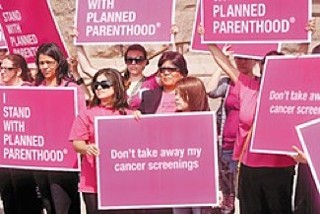 Final rules for the Texas Women's Health Program exclude Planned Parenthood, relax rules covering provider discussions of abortion, and include funding for treatment of sexually-transmitted infections. And, if the state can line up enough providers, the new program will launch Nov. 1.

Health and Human Services Commissioner Kyle Janek feels certain that enough providers will be found to serve the nearly 50,000 women last year who received WHP-related services at one of the state's participating Planned Parenthood clinics and will be left without a provider when the new Texas program takes effect."We know there's a market" for the program Janek, the former Republican state senator from Houston told reporters Thursday afternoon. "As long as there's a market, I'm confident we're going to get the number of providers we need."

The new state-run Texas WHP will look a lot like the Medicaid-waiver program devised by lawmakers in 2005 – but without the infusion of federal money or the participation of the state's largest network of family planning clinics.

But unlike the rules initially proposed earlier this year, the final rules will allow providers to have "private" discussions about abortion, what Janek called "non-directive counseling." A provider could answer factual questions, or provide the name of a doctor who provides abortion, but could not go any further. The rules will not effect what, or in what way, TWHP providers discuss abortion with their non-TWHP clients, Janek said. The final rules also allow physicians who work in hospitals or are members of a physician group to participate in the program, even if another doctor they're associated with provides abortion services. The changes were meant to address the concern raised by the Texas Medical Association (on behalf of their members and those of the American Congress of Obstetricians and Gynecologists and the Texas Academy of Family Physicians and Texas Pediatric Society) that constraining their relationships with patients in order to participate in the TWHP would violate medical ethics.

In a statement, TMA President Michael Speer said TMA is still reviewing the revised and final rules, but said doctors are encouraged by the changes. "It is very important that patients are able to trust that their doctor is giving the best medical advice for them – based on their medical needs and nothing else."

The WHP was originally designed to provide access to subsidized healthcare for women who would not be eligible for Medicaid unless pregnant. Pregnant women are not eligible for enrollment in the program. The goal of the WHP was to reduce the number of unplanned births in Texas, more than 50% of which are paid for by Medicaid at great taxpayer expense. Under the WHP, the feds paid 90% of costs, the state reduced its births by roughly 8,000 per year, and saw annual revenue savings of roughly $23 million. Since 2007, the program has provided family planning and basic health screenings to more than 400,000 women, Janek said. And under the original program, more than 40% of WHP clients per year were served by Planned Parenthood clients.

Planned Parenthood's dominate role in the program did not sit well with some in the Capitol and last year lawmakers redefined the definition of an abortion-providing "affiliate" and one that "promotes" abortion in order to exclude Planned Parenthood from any further participation in the WHP. Although Planned Parenthood clinics that participate in the WHP do not provide abortion care, they are now considered affiliates of Planned Parenthood clinics that do provide abortion care. Federal law does not allow the state to ban the clinics so to carry out the ban the state will have to come up with $36 million it will cost to fund the TWHP next year; including administrative costs, HHSC estimates the program will cost $43 million.

While concessions were made in the new rules to ensure that private physicians would not be kept from participating, it remains unclear whether there will be enough private physicians or others providers – including federally-qualified health centers and other non-Planned Parenthood family-planning program providers – ready and able to absorb the roughly 50,000 women left without a provider.

Supporters of the change have insisted that there will be enough providers to fill the gap, and Janek remains optimistic that will happen. That has not been the academic view. In May, researchers at George Washington University estimated that in order to absorb the orphaned patients, community health clinics would have to expand their capacity for TWHP patients 12-fold; last week GWU researchers reported that excluding Planned Parenthood will lead to an increase in unintended pregnancies.

Janek said the state will tweak some things in order to make the program more attractive to potential providers. The TWHP will cover STI treatment, where the old program only paid for testing. And there will be better coverage for intrauterine devices, a long-term birth control option with a lower failure rate than oral contraceptives, but that is expensive to provide. Doctors have said that they lose money providing IUDs, Janek said, and he'd like to correct that. Otherwise, he said the reimbursement rates for TWHP services will track what providers received under the Medicaid WHP – as of this spring, $66 for new patients, and $39 for established patients.

To Fran Hagerty, CEO of the Women's Health & Family Planning Association of Texas, the historically low reimbursement rates are only part of the problem of recruiting new providers. Because the WHP reimburses only for a narrow range of services, FQHCs may be unable to take on new patients because federal law requires them to cover all of a patient's needs and not only a portion of them, and many don't have funds to cover wraparound services for a host of new clients. Hagerty says private physicians may be similarly hesitant because while they're not bound by law to serve the whole patient, she says she could see that they would be uncomfortable turning clients away once a problem is discovered, regardless of that patient's inability to pay. "The [WHP], when it was put together, was designed to work in a particular setting, what are called 'specialty family planning clinics,'" she said. In other, less specialized settings, "small batch services with low reimbursement rates" become increasingly difficult to provide.

If the state can't find enough providers over the next two weeks, the federal government may continue funding to keep the plan going, with Planned Parenthood's involvement, through the end of the year. Janek said he had a "very gracious" conversation with the Centers for Medicare & Medicaid Services and was told that federal funding cannot extend beyond Dec. 31. Janek has not asked for an extension beyond Nov. 1, but says the possibility is there.

Still unsettled is whether Planned Parenthood will prevail in its effort to block Texas from enforcing the rule that would ban their participation in the TWHP. The clinics have argued that it violates their rights of free speech and association, and equal protection under law. A stay was issued earlier this year by federal district Judge Lee Yeakel. That was later overturned by a panel of the 5th U.S. Circuit Court of Appeals, who concluded that the ban fell within the state's right to ensure that the message of it's program remained undiluted by the specter of abortion. Planned Parenthood has asked for a rehearing by the entire Fifth Circuit. The court has not said whether it will grant the request.

But should it do so, and decide that the three-judge panel got it wrong, the final TWHP rules contain a poison pill provision: If the courts require the Texas to do something that contravenes state law, the state will fold the entire program – potentially leaving more than 115,000 women without any access to health care. Whether the clause is in keeping with lawmakers' intent is unclear. A similar provision was proposed by Sen. Robert Deuell, R-Greenville, during last year's session, but was not adopted. More important, says Hagerty, is whether Texas could actually afford to go without a program that significantly reduces its yearly costs associated with Medicaid births.

Janek did not directly address whether the new rule expanded on legislative intent – as a senator he would have been "happy to engage" on that point. Now, as head of HHSC, he does as directed. If the ban on Planned Parenthood "goes away, that really subverts the intent of the law," he said. And, "the Legislature's going to have to work it out." What would women do if the TWHP goes away altogether? "That would be a question, bluntly, of what did they do before we had the waiver to begin with," he said.