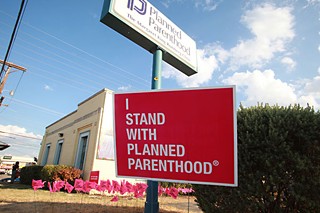 If the state goes through with its plan to cut Planned Parenthood out of the Women's Health Program when the new state-run version of the program comes online on Nov. 1, women's access to affordable care will suffer, according to a George Washington University study released late last week.

That tens of thousands of women would be left without access to their provider of choice is not news, but the extent to which the health care infrastructure would be damaged in communities across the state is. According to the GWU study, Planned Parenthood is the "dominant" provider of basic reproductive health services to women in Bexar, Dallas, Hidalgo, Lubbock, and Midland Counties, serving between half and four-fifths of all WHP clients in those areas. If Planned Parenthood is cut from the program, other non-PP providers in those areas would have to expand between two- and five-fold to absorb the women left without care. In more rural and less affluent areas, including Hidalgo and Midland Counties, where there are few alternative providers, women are likely to lose access to health care altogether, according to the study.

As a result of any ban on Planned Parenthood, local health care providers expect to see a "substantial" increase in the number of unplanned pregnancies, according to the study. According to the Texas Health and Human Services Commission, the WHP successfully averted more than 8,000 births in 2011, and saved the state some $23 million. If the Planned Parenthood ban had been in place, GWU reports, the number of births averted would drop by up to 3,000 and the state would lost up to $6.6 million in state funds.

The WHP was originally a Medicaid-waiver program, with 90% of funding coming from the federal government. But the state determined last year that Planned Parenthood should be excluded from providing services to WHP clients because some Planned Parenthood clinics provide abortion services, though not at any of the clinics that serve WHP clients. Pregnant women do not qualify for the WHP. The state's decision prompted the feds to deny renewal of the waiver because federal law would not allow the state to exclude an authorized Medicaid provider from participation in the program. Gov. Rick Perry dismissed the federal concern (instead he said that forcing the state to include Planned Parenthood was part of a "pro-abortion agenda"), and announced that the state would go it alone and fund the program entirely with state funds in order to allow it to exclude Planned Parenthood. Whether the state can actually afford to go it alone has been a matter of speculation. Indeed, as a waiver program enrollment in the WHP increased substantially each year. With the state funding the program advocates are concerned that it would cap enrollment, thus negating goal of providing care to as many eligible women as possible. Currently, there are more than 1 million women in Texas in need of basic reproductive health services; currently, there are roughly 110,000 women enrolled in the program.

Additionally, the loss of access to the WHP for low-income Texas woman could have a very serious impact on the early detection of disease. Texas has the highest rate of uninsured women of child-bearing age, 34%, a rate that increases among low-income women. In Hidalgo County, for example, women age 18-39 who are low-income and uninsured topped 66% according to the GWU study. Meanwhile, Texas women have the highest rate in the country of diabetes, the third-highest rate of reported cases of syphilis, the 10th highest rate of reported cases of gonorrhea, along with the the third-lowest rate of primary care physicians per 100,000 residents. (While the WHP does not pay for STD treatment, it does pay for screening and provides referrals for treatment.) Taken together, the loss of Planned Parenthood, or any additional crippling of the WHP, would spell more trouble for Texas' already dicey health care landscape.

More on the changes to the WHP is here.

More on a May report from GWU is here.

Additional background on state cuts to family planning is here.