A week of eloquence and urban survivalism

As I mentioned in an earlier post, I came to Charlotte, N.C. in search of rebuttals to the previous week’s nonsense at the Republican National Convention in Tampa, Fla., as well as a bit of inspiration after four years of patience-testing political reality. 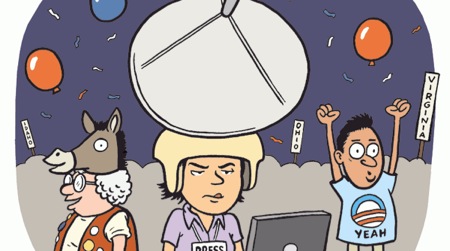 Cartoon by Jen Sorensen
This year’s convention lacked some of the drama and mystique of Denver 2008, which was to be expected. But the speeches were excellent — possibly even better than in ’08 — and the audience displayed no shortage of enthusiasm. The open support for gay marriage at a national political convention was a historic moment I’m glad to have witnessed. On the whole, it was a solid show.

On a personal level, I found the week to be more trying than my experience than Denver. Security was extreme and confusing, and the imported cops often had no answer to questions like: “How many blocks out of my way do I have to walk before I can get through this fence?” I probably spent an average of three hours a day just trying to get around, and I was lucky to be staying only two miles away. Many members of the press, including a couple Wall Street Journal staffers I shared a taxi with (at 2am, after waiting for an hour), were stationed in South Carolina. Planned Parenthood staffers were having trouble getting to their own rally, and I probably walked an extra half-mile trying to get to it myself. 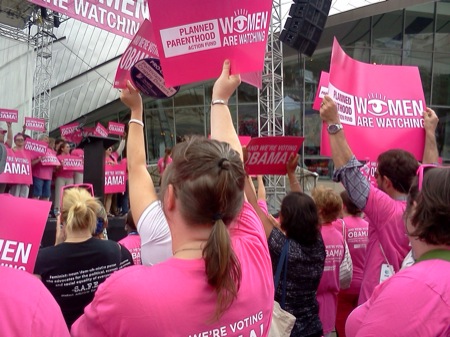 The ones who made it (Photos by Jen Sorensen)

And oh, the rain. Whenever I wanted to go out and do something, a monsoon appeared, as if on cue. This was not due to the fact that I was cursed, but that there was a monsoon every 10 minutes. I reassured myself that things could be worse: I could be in a Vietnamese jungle, circa 1969, covered in leeches. But this only convinced me that I would perish very quickly in a combat situation.

I wanted to do some sketches, but the hours I spent in the convention hall were not conducive to complex creative processes. My seat, located at approximately the same altitude as the International Space Station, was dark and cramped. The view of the podium was not all that bad, but I had to contend with the butts of a thousand journalists squeezing past my face. By the end of the convention, I had attained a new appreciation for reporters who can churn out 1,000-word think pieces about speeches at the same time they’re listening to them. (Of course, the dirty little secret about those people is that many of them are watching on TV from remote media rooms with advance copies of the evening’s remarks.)

A couple memorable encounters that I didn’t get around to blogging about at the time: I met a delegate named Charles Degnan from Unalakleet, Alaska, a town of 700 on the state’s western coast in the general vicinity of Nome. Charles took two days to fly to Charlotte, passing through Anchorage, Seattle, and Dallas en route. Degnan, who served on a tribal council in the Alaska legislature, said he supports health care and equal treatment for all people, whether they are from small communities or large ones. He proceeded to give me an Alaska pin, which is now my favorite souvenir from the convention. 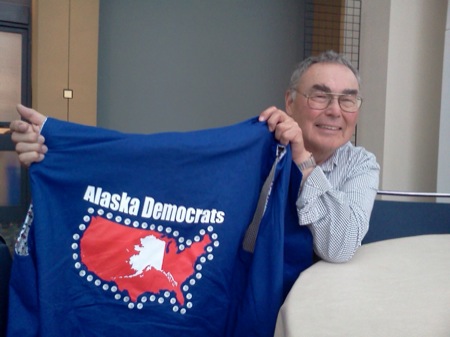 Late that night, I walked out of the hall with a buttoned-down member of the British press who had just come from the RNC in Tampa. When I asked for their impressions, the reporter hesitated, not wanting to sound impolitic. Then the reporter blurted out, “The people were different — they were a bunch of tossers!” adding, “We have racists too, but at least they keep it hidden.”

The most dramatic event of the week was when I got swept up in the middle of an impromptu Occupy march after a standoff with police. Thankfully, I didn’t get tear gassed or arrested. In fact, when I asked an officer if I could proceed to where the protesters were, he said, “Go right ahead.” 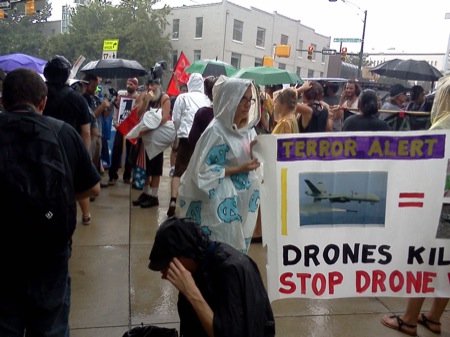 When the marchers reached the Charlotte Convention Center, they clashed with Obama supporters, leaving me to ponder the vast divide between the two groups for the rest of the week. As someone long opposed to the drone strikes but also worried about the tragic consequences of overturning the Affordable Care Act or reinstating the Global Gag Rule, I have empathy for both sides, and have become weary of the binary conflict that has emerged on the streets and in my Twitter feed.

So, it was a successful week for the Dems, if an exasperating one for journalists trying to cover it. This concludes our broadcast; thanks for following along and for all the Twitter feedback. Sorry I could not reply to everyone’s tweets. I also want to express heartfelt thanks to the generous Jen B. for letting me stay at her apartment in Charlotte, which she probably could have rented out for thousands of dollars.

Bring on the debates!

Live From the DNC
The grand finale, including Barack Obama's Thursday speech