Gloria Steinem heralds the dawn of a new era 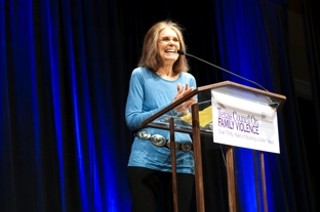 "How many other people here are over 70?" asked Gloria Steinem as she scanned the AT&T Conference Center hall. A very small smattering of visible hands shot up in the room, sardined with a mostly female crowd Wednesday afternoon.

"For 95% of human history, it hasn't been like this," reassured the 78-year old activist and author, offering lesser-known examples of collaborative and matriarchal cultures as broader context for the current state of very obvious backlash against progressive values, "And I find that hopeful.

"The biggest way that people get to you, is to say that things are inevitable: That there's 'always been racism, and there will always be violence.'" affirmed Steinem, insisting that history proves that this has not always been the case. Using historical examples in which indigenous cultures created stable and equal gender roles void of physical violence, Steinem charged the last 5000 years of human history as fluke. "I think today we should proclaim the last 500 to 5000 years an experiment that failed," Steinem chortled to uproarious laughter and cheers.

"This is the first day of post-patriarchal, post-hierarchical, post-racist, post-homophobic, post-bullshit. And you are its pioneers."

Certainly among the oldest in the room, Steinem's energy still buzzed after two standing rounds of applause before her speech even began. The septuagenarian feminist took the stage as the keynote speaker at the annual Texas Council on Family Violence Conference, which has brought together over 100 different Texas institutions to foster safe and healthy family structures in the face of domestic violence. In Steinem's address,"Feminism: Past, Present, and Future," she made the case that there is a direct correlation between violence in the household and violence in society, suggesting that domestic and family violence "normalizes" the perception of larger acts of violence in the world. She urged attendees to continue the push for gender equality through reconstruction of family hierarchies.

During Steinem's hour-long speech she encouraged the crowd to work through the specific social maladies that she defined as unnecessarily normalized in today's society - rape ("Rape is not sex," she asserts), pornography ("Pornography is not erotica"), prostitution, and family violence, etc.

And just as Steinem was appearing to dodge direct election-charged rhetoric despite the ongoing Democratic National Convention, the afternoon's Q&A session opened the floor to a question about the current partisan climate: "What are most dangerous political obstacles in the election?" she was asked.

In her lifetime, Steinem said, we've witnessed the emergence of the acknowledgement of violence in the home as a part of a broader social ill. "When I was growing up,"she said, "there was no term, 'domestic violence.' There was 'life.'"

As the term "domestic violence" became a recognized legal definition, she posited, progress began. Once the problem was defined, it was possible to put into place things like police protocol and institutions like battered women's shelters and eventually organizations like TCFV. But even Steinem acknowledged that at times the fight for gender equality is threatened by shifting climates. Ultimately, however, her message was one of hope.

"Things are changing profoundly, and that is the source of the backlash, that is the killer instinct coming out in people with a hierarchical frame of mind," she reflected, relating the example that the most dangerous time for an assault victim is right before they escape a life-threatening situation or right after. She applied this to society at-large, reflecting on the progress that has been accomplished in this massive shift forward in the struggle for human rights. "The old hierarchical view is in panic," she asserted, "So two things are true - we need to be aware of the danger and take care of each other, and understand that this is a time of maximum danger in this country. And the other thing is we're about to be free."