Live From the DNC

As you may have heard, Bill Clinton knocked the socks off the crowd in Time Warner Arena on Wednesday night.

I thought I’d grown immune to adrenaline rushes from political speeches, but by the end of that one, when Obama materialized and the entire audience rose screaming, I was feeling it. I will even admit to a new appreciation of Tom Petty’s “Won’t Back Down.” Yes, the cynical cartoonist in me remains all too aware of the flaws of both presidents, but after what went down in Tampa last week, America needed some clarification. And clarity is what Clinton delivered.

The accompanying photo is of a sand sculpture on display near the convention, provided by the fine people of Myrtle Beach. Personally, I find the rendering of Obama to be slightly demonic, but hey, I don’t have to sculpt comics out of sand. I don’t even know how they get the ears to stay on.

The security clampdown in Charlotte continued to escalate today, to the point where I felt like the subject of a giant human experiment. Somehow, Denver 2008 was easier. I can’t even imagine what hoops I’ll have to jump through on Thursday. 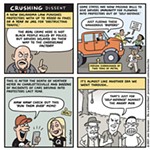