Activists say cop encouraged them to break the law 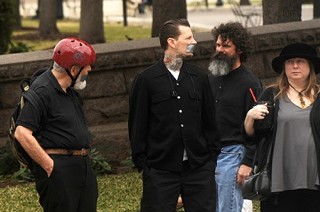 Did an undercover Austin Police detective induce members of Occupy Austin to commit felony obstruction of a roadway during a demonstration in Houston in December 2011? Or, did he – and two colleagues – intervene in protester plans in order to keep them, and police and firefighters responding to the Houston protest, safe?

Those are among the questions now before Harris County district Judge Joan Campbell, who is presiding over the prosecution of Austinite Ronnie Garza, one of 16 Occupy protesters from across the state arrested in December during a demonstration at Houston's port, part of a nationwide “Occupy the Port” action. Garza is among a group of eight of those protesters who are now facing felony charges of “possession of a criminal instrument” as a result of that road-blocking action, while the other eight protesters, who were also blocking the road, were charged only with misdemeanor obstruction of a highway. A felony carries a possibility of two years in a state jail while a misdemeanor is punishable by six months in the county lockup.

At issue is the manner in which each group of protesters blocked the road – and who shares responsibility. The group facing the misdemeanor charges locked arms while lying across the roadway; the group facing the felony charges linked their arms with the aid of a "lockbox" (sometimes called a “dragon sleeve”). It’s essentially a home-made PVC sleeve made to lock protesters together or to a stationary object. The lockbox is typically made by drilling a bolt through a width of opaque PVC pipe – using chain and carabiners, protesters can be locked to the bolt or each other, their arms hidden snugly inside the pipe. Unless the user releases an arm, the device usually must be cut off, posing risk to the user and, potentially, to the police or firefighters doing the cutting, if booby traps are employed inside the pipe.

It was those concerns about safety, says APD Assistant Chief Sean Mannix, that prompted APD detective Shannon Dowell to get involved last December in constructing a series of lockboxes eventually used by the eight protesters arrested for wearing them at the Port of Houston. Dowell (known to protesters originally as "Butch") was working undercover within the Occupy Austin movement. His real name and occupation was discovered by an investigator working for defense attorney Greg Gladden. Mannix confirmed testimony Dowell provided in court this week, that the APD actually had three undercover detectives, including Dowell, working inside the movement last year – but the point wasn't to disrupt activities, claims Mannix, rather to ensure that any person in Austin wanting to engage in "protected free speech" would be free to do so.

Informants had already told APD that there were individuals inside the movement who were advocating violence, Mannix said, and the idea of having undercover officers attending OA General Assembly meetings and participating in various demonstrations was devised solely, he insisted, to ensure the safety of everyone, including not only police officers but the protesters themselves – not to foment trouble or to try to shut down the movement. "We are there to protect people who want to engage in protected speech," Mannix said. According to Mannix, Dowell and the other two undercover officers had attended General Assembly meetings where the use of lockboxes as acts of civil disobedience were discussed and approved. At an Aug. 27 court hearing in Houston, Dowell acknowledged that he helped to build and provide the lockboxes; Mannix claims that was in part to make certain that the devices were safe. (OA activists say the other two undercover cops used the names "Rick" and "Dirk”; OA members haven't yet secured their real names, and the APD declined to reveal them.)

But Garza's attorney Gladden, former president of the ACLU of Texas and a member of the National Lawyers Guild, and other Occupy Austin activists tell a different story. According to an affidavit by David Cortez, head of Occupy Austin's bank actions committee, it was Dowell who encouraged the activists to don the lockboxes. "He was a fairly quiet individual who never contributed much to our meetings," Cortez recalled of Dowell, "but consistently pulled myself and others aside individually in order to express his frustration with debate and eagerness for more aggressive and provocative actions than our standard peaceful & nonviolent ones," reads the affidavit. According to the affidavit of fellow OA member Yatzel Sabat, possible acts of civil disobedience, "including trespassing, sit-ins or obstruction of passage ways" had been discussed at meetings but it was Butch (Dowell) who was involved in the initial discussion of using lockboxes, and it was he who "acted more excited about the idea," reads the affidavit. "He volunteered to gather the piping and other materials by purchasing it at Lowe's and delivering it back to the members of the group that were planning to go to Houston for the demonstration," she continued. "Butch persuaded us to use these arm tubes."

Sabat and Cortez note that the lockboxes weren't necessary to carry out the protest; the other eight members who blocked one of the roads leading to the port did so simply with their bodies. And without the influence of the APD officers, Gladden says, the eight now facing felony prosecution, including his client Garza, would have done the same. In short, he says, Dowell's actions entrapped his client and the others, inducing them to take an illegal action they otherwise would not have undertaken. "The police knew the kids could be charged with the felony" for using the lockboxes, Gladden says, "but the kids didn't know [that]."

The court must decide whether the activists were induced into using lockboxes – which are not illegal to construct or to own, but are illegal when intended for use in a crime – the distinction that allowed the state to bump the misdemeanor obstruction charge into a felony offense for Garza and his fellow Occupiers.

And based on the transcripts of this week's hearing in Campbell's court, the APD's official story hasn't been embraced. Dowell was subpoenaed by Gladden to attend the pre-trial hearing, and to bring with him all written and electronic records – police reports, text messages, emails, pictures and notes – related to his Occupy investigation. But Dowell showed up, essentially, empty-handed. He had photos on a thumb-drive of the boxes and the woman he delivered them to, he testified, but he somehow lost that drive on the way to court; he had emails on a work computer (and, it seems, on a personal computer as well) and phone messages, but he had deleted them. He brought with him only "a little note that I made here regarding [an Occupy] meeting," he said. There are no written police reports, he said; since there was no criminal investigation ongoing, there was no reason to write an official report for the APD system, he testified. Judge Campbell did not seem impressed: "When he is sent a subpoena and he doesn't respond and he doesn't come with his own attorney," she said, "I think they lose a little bit of the dignity that they should be carrying themselves with."

Campbell reset the hearing for next week, and has told the state that the state must produce the names of Dowell's APD cohorts, or see the case dismissed. The two other officers are fact witnesses who could help determine whether the police induced the activists' use of the lockboxes. "We need the real name of Rick next week or dismissed," Campbell said.

Regardless of the outcome, Mannix insists that the APD's involvement in Occupy was motivated by a desire to protect free speech, not to impede it. Gladden doesn't see things that way. "It's an old story," he says – as old as the FBI's notorious Counter Intelligence Program's hunt for subversives, communists, and civil rights activists. "Basically, it's just a chilling effect, that's what they're trying to do."