How the GOP Ended up With a Rape Problem

It's not just Todd Akin: Republicans reveal their radical mainstream 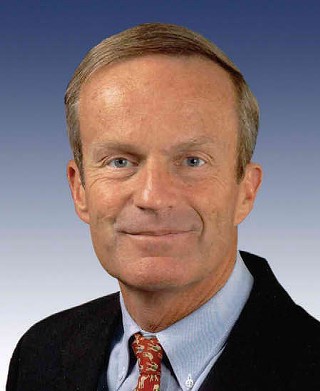 Congressman Todd Akin: Too toxic for all his old friends (at least in an election year)

Missouri US Senate candidate Todd Akin has done the GOP one favor: He has distracted the press from economic and social radical Paul Ryan. However, his rambling comments about "legitimate rape" have revealed their radical underbelly.

Just to re-iterate, and to prove to future generations that this is not some bizarre art prank being perpetrated by every contemporary journalist, Akin is fighting Democrat Claire McCaskill for one of the state's US Senate seats. He recently claimed that women don't get pregnant if it's really rape. No, really. When asked about abortions in the case of rape, he said:

"First of all, from what I understand from doctors, that’s really rare. If it’s a legitimate rape, the female body has ways to try to shut that whole thing down. But let’s assume that maybe that didn’t work or something. I think there should be some punishment, but the punishment ought to be on the rapist and not attacking the child."

He has become the modern Claytie Williams: For those of you who don't remember, Williams ran against Ann Richards for Texas governor in 1990. He was in the lead until he claimed that rape is like bad weather – "If it’s inevitable, just relax and enjoy it." Cue victory for Richards and the permanent destruction of Williams' reputation. Oh, wait, did I say his career in politics was over? No, wait, Sen. John McCain was quite happy to hold a fundraiser at his house in 2008 until everyone went, "What, that Claytie Williams? Oh, oh, oh."

But the GOP's big problem is that Akin is not some fringe nut. He's a mainstream nut, and much as the GOP may try to deny it, he has been a loyal party member and office holder for decades. He was seemingly mainstream enough for his 11 years in congress, or the prior 12 years in the Missouri House of Representatives.

The establishment right went into panic mode. Not the traditional establishment, which has watched its power ebb away as the new establishment, the Tea Party establishment, swings the party to the far right. Radicals like Peggy Venable, for Koch Brothers front operation Texas Americans for Prosperity, started pleading with Akin to stand down – pleas that fell on deaf ears. The logic is simple: No one wants to stand near "legitimate rape guy," not in an election year. GOP strategist Matt Mackowiak Tweeted, "Akin's selfishness is hurting every Republican in Missouri, every Republican running for federal office, even the ticket."

(Wonder how Mackowiak feels about Ryan burbling to the Johnson City, Tenn., CBS affiliate WJHL that "I’m very proud of my pro-life record, and I’ve always adopted the idea that, the position that the method of conception doesn’t change the definition of life.")

Of course, some of the wilder lamentations come from the GOP wanting to lay all its ills at Akin's door. The odds of them taking the US Senate were a long shot anyway, but now even Republican Committee Chair Reince Priebus has is claiming that it'll be Akin to blame if they do, and so he just needs to get out to save "the mission of liberty and freedom."

When we wondered about the evident desperation, Venable furiously Tweeted at the Chronicle that it's "just time to weed out the deadwood." When we asked whether Akin was deadwood "when AFP sank millions into anti-McCaskill ads … or when he attended July's AFP Missouri state summit," she replied that "you are proof that folks can lose it."

The last time we saw so many GOPers backing away from their own opinion makers was when governors (and fishing buddies) Rick Perry of Texas and Rick Scott of Florida started backing away from Ryan's budget plan and his threats to Medicaid and Medicare. Even Mitt Romney, who had been praying for a Ryan bump to keep his election chances on life support, did the political equivalent of a dismissive pat on the head when he said he supported Ryan's ideas, but not his plan.

The Lone Star Report acidly noted that Akin "has exposed vulnerable Republicans who now must be held accountable for their own extreme and insensitive views and votes on rape, women’s health, and basic public safety." In Texas, they note his close links to Texas Congressman Francisco "Quico" Canseco, who cosponsored Akin's "forcible rape" bill.

It must be noted, part of the interest in Quico for the LSR is that he faces a challenge from veteran Democratic state rep Pete Gallego – but his campaign's life may just have been made easier with the announcement that Quico is speaking at this weekend's Republican National Convention in Tampa (in case of bad weather, break out the crazies). Nothing like national exposure to give your "legitimate rape" platform full exposure.

It also gives Texas Democrats new angles against Mark Shelton, the GOP's chosen weapon to remove their most hated opponent in the Texas Senate – Fort Worth Democrat Wendy Davis. Unfortunately for Shelton, he was one of a handful of lawmakers who voted against Senate Bill 1636. That's one of those, "wait, how are we not doing this already?" measures: In this case, it set deadlines for law enforcement to process rape kits.

Yet they are not alone. Not by a long stretch.

– How's about darling of the super-right, Rick "Google problem" Santorum, who said pregnant "rape victims should make the best of a bad situation" by regarding their pregnancy as "a gift in a very broken way, the gift of human life, and accept what God has given to you."

– Or what about Tennessee State Senator Stacey Campfield, who claimed to Huffington Post that "my understanding is that it is virtually – not completely, but virtually – impossible to contract AIDS through heterosexual sex."

– Not to be outdone on the failing grade in biology, in April the Arizona state legislature passed a bill that believes women get pregnant two weeks before sex. Rep. Kimberly Yee, R-Phoenix, authored this masterpiece of time bending anti-choice crap, which states that gestation should be "calculated from the first day of the last menstrual period of the pregnant woman" – and not, you know, when she actually got pregnant.

– That's right up there with the cadre of Texas GOP lawmakers who had no idea what implement is used for a transvaginal ultrasound – the kind they would force rape victims or any other woman seeking an abortion to go through.

And it's not just sexual politics where the GOP's ugly flanks have been exposed to everyone.

– Take Lubbock County Judge Tom Head, who claimed that he needs a 1.7 cents tax increase because (and, no, this isn't from The Onion) he believes that President Barack Obama is "going to try to hand over the sovereignty of the United States to the UN." The tax increase, in Head's mind, will cover extra training so the sherriff's office can fend off the ravening blue helmeted UN hordes. He seems to have been guzzling down Alex Jones' apocalyptic Agenda 21 nonsense. Either that, or he's indulging in the worst kind of base baiting. Either way, put down that copy of Red Dawn.

– Or Texas Attorney General Greg Abbott, who is already geared up for his widely forecast run for governor in 2014. In a Tweet this morning (which our good friend Forrest Wilder at the Texas Observer adroitly described as "9 layers of BS"), Abbott claimed "UN Official: "climate-change policy was a way to redistribute wealth globally.” Like Wilder said, BS. Abbott was linking to a Washington Times story that repeats a GOP myth that Ottmar Edenhofer revealed that climate change theory is actually an elaborate Marxist concoction. What Edenhoffer actually was talking about was a proposal – one of many to deal with pollution – of distributing emission caps globally on a population basis. If that happened, he said, "Africa, as well as India, would profit the most. It then comes down to insuring that the money is used to insure the development of these countries and not be given to corrupt elites." Edenhofer was talking about the side effects of one possible plan. The logic is pretty straight forward: People in developed nations current use more energy and pollute more than people in developing nations. In the GOP-o-verse, especially when filtered through Abbott's campaign lens, it's a socialist conspiracy.

And not forgetting Rep. Debbie Riddle, R-Tomball, who recommended bypassing the restrictions on prayer in school by reading from the Book of Proverbs. She blithered, "Proverbs is a book of wisdom. Proverbs is in the Holy Scriptures for Christians and Jews. As for other religions – the wisdom won’t do them any harm." Hey, I suppose, by that logic, she has no objection to a few passages from the Tibetan Book of the Dead?

And, while we're on it? Death panels? Remember those.

Are all of these the fringe right? Really? Or are they where the GOP really is today? And, if so, was Akin really an outlier, or just inconvenient?