Council member returning to dais and classes next week

Hurray for classes and an end to split council votes! UT professor of public affairs and Austin City Council Member Bill Spelman is recovering after surgery for a pancreatic tumor, and is scheduled to return to duty next week.

In a statement, Spelman's office said the recent surgery went well. While pancreatic tumors are always serious and often life-threatening, his pancreatic neuroendocrine tumor was reportedly less virulent that most. While he will still undergo tests and scans, his doctors believe they had got all the tumorous cells. Spelman said, "The surgeons got good, clear margins around the tumor. There's reason to believe they got it all."

He should be back at council next week, and plans to make the first day of classes at UT on Aug. 29. Cue a sigh of relief all round (not least from Mayor Lee Leffingwell, who nobly stepped up to the plate at last week's council meeting to provide a trademark Spelman-esque PowerPoint presentation. If you didn't catch it, the Spelman Report may be the funniest act in Austin politics since the infamous Leffingwell/Brewster McCracken rap battle of 2009. 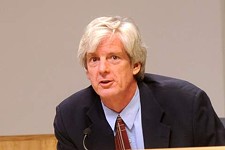