Council Divided But Moving on With Bond 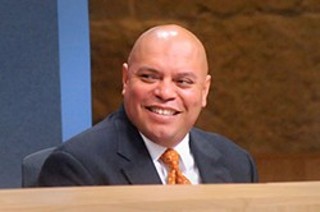 Council Member Mike Martinez: One bond vote down, two and a November election to go (Photo by John Anderson)

Let the horse trading, erm, continue! This morning Austin city council split 4-2 in the first vote to move forward with the $385 million bond package. Now expect a lot of pushing, pulling and fighting before the final version is approved before Monday's filing deadline.

Yesterday's work session ended in gridlock, with Mayor Lee Leffingwell and Council Member Chris Riley backing the proposal brought forward by Council Member Mike Martinez. Yesterday Council Members Kathy Tovo and Laura Morrison, plus Mayor Pro Tem Sheryl Cole, formed a united front opposing the plan. Well, the specifics of the plan. They had their own, subtly different $385 million plan – well, in fact, a $400 million plan that they wanted to whittle down to $385 million.

Today, after some negotiations, Cole broke away and backed a revised version of the Martinez plan that trimmed some items back to provide cash for others. That gave Martinez the 4-2 he needed to move forward (seventh member Bill Spelman is out after the discovery of a tumor on his pancreas.

Expect more wrangling all weekend: Council does. Even though the package comes up for debate in tomorrow's regular meeting, they have scheduled special called meetings on Friday, Saturday and Monday.

However, it does look like a few extra people will benefit from this re-slicing of the pie. So far, it's good news for Austin Studios, for example, because it looks like council is backing their request for cash to complete the renovations of the National Guard Armory when they take it over this Fall.

Yet that could all change before Monday, as council prepares to slice and re-slice this baby. Plus, a quick reminder: The package, which is split into seven bond proposals, still needs to get voter approval in November.

Now, whatever happens, that $385 million total will not rise. Why? Because that's the highest the city can go without a tax increase. And with Central Health likely to go for a five cent property tax raise to pay for the proposed medical school, and Austin ISD still on the fence about how to pay for a long-overdue pay raise, it looks like the city has accepted it will have to cut its cloth accordingly. How badly does this affect city infrastructure? Considering the original needs assessment was for $1.5 billion, then this proposal only covers a quarter of what the city thinks it needs.

Here's a quick overview of what's going where: